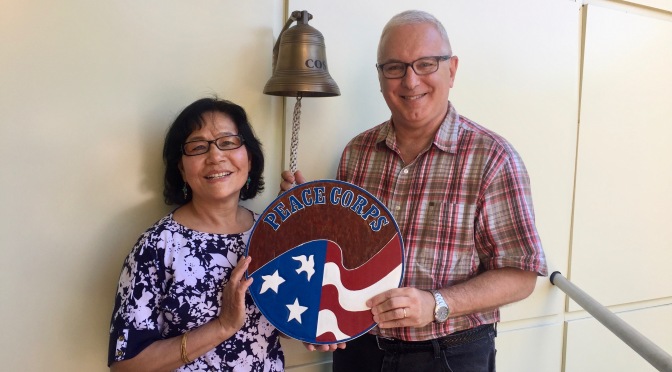 We rang the COS bell on Tuesday, completing our service in Peace Corps Moldova.

We joined a large group of volunteers in our group who are among the first to officially complete their service. Champa and I depart on Wednesday for a short trip and will then head home to North Carolina.

This special moment also feels like the right time for me to take a pause from this blog.

Readers, I want to thank you so much for following along with Champa and me, regardless of how recently you discovered “Not Exactly Retired” or how regularly you’ve tuned in.

I’ve posted 265 stories since we started our adventure three years ago, attracting readers from around the world. My blog posts and videos have been viewed more than 100,000 times. I’ve treasured the messages and comments I’ve received in response, especially from readers who said they were inspired to follow their own dreams.

This blog and my videos never interfered with my primary Peace Corps assignment at the Ialoveni library or the projects I’ve undertaken in Moldova. (As a former news office director, I work fast.) Indeed, they have helped me make sense of our time here while simultaneously promoting the Peace Corps goal of enhancing understanding between Americans and people in other countries. 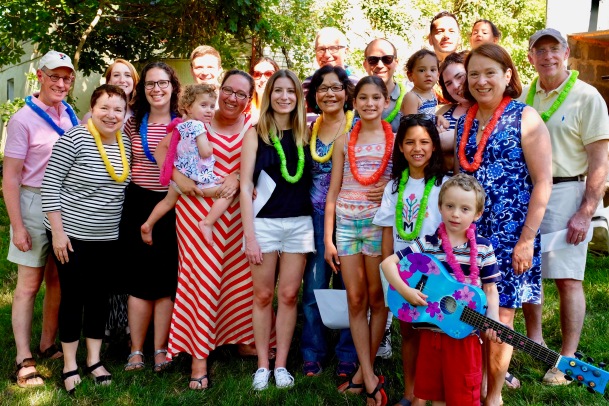 I’m not ending the blog, just taking a break while we reintegrate with American life and our family (above), which has been waiting for us to come home. I expect to return in the future with some new adventures and hope you will join me then.

We’ve loved having you with us on our journey and hope you will pursue yours as well. Life is awaiting you, no matter how you choose to define your own “not exactly.” For now, I bid you a heartfelt la revedere. 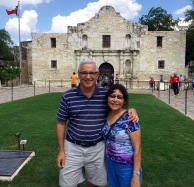 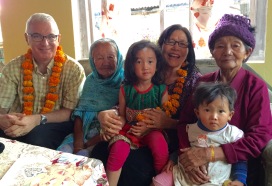 This is my 100th post on Not Exactly Retired, which has attracted more than 7,500 visitors since it began in mid-2015. I’ll be celebrating the milestone with a special series about older volunteers in the Peace Corps, starting with my next post.

First, though, especially during this holiday season, I want to pause to tell all of you how much I love producing this blog and appreciate all of you who read it.

Before Champa and I began our journey 18 months ago, I spent a career doing communications for nonprofit organizations, much of it ghost-writing articles and speeches for others. For four decades, I largely put my own writing aside.

Only after I started Not Exactly Retired did I realize how much I’d missed speaking in my own voice.

Now I get to report first-hand on issues such as immigration or the devastating 2015 earthquake in Nepal. I can be silly, as with the adventures of our traveling gnome. I can produce videos one week and share recipes the next. Some posts get picked up elsewhere and reach national audiences.

What I’ve enjoyed most is sharing the incredible experiences Champa and I have had since we walked away from our conventional American lives to pursue new lives of adventure and service, most recently as Peace Corps volunteers in eastern Europe. I treasure the many messages I’ve received and posts I’ve seen from people saying the blog is inspiring them to consider changes in their own lives.

I’ve always been a quick writer, so I can produce the blog while remaining active with everything else I am privileged to be doing as a Peace Corps volunteer. Things go even faster because the layers of my institutional vetting process now work as follows:

Me talking to myself: “So, David, do you approve this?”

Me answering myself: “Yes.” 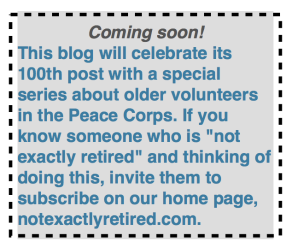 Most blogs fail. A 2009 New York Times article cited a Technorati survey saying 95 percent of blogs were “essentially abandoned, left to lie fallow on the Web, where they become public remnants of a dream — or at least an ambition — unfulfilled.”

Not Exacly Retired is going strong thanks to all of you who read it, offer comments and send encouragement. I hope you enjoy the upcoming series and everything that follows. If you have a friend or relative who is pondering how to live the second half of their lives,  or who just has a sense of adventure, I encourage you to share Not Exactly Retired with them, too. Perhaps they will find it useful, or at least entertaining.

As always, I recommend you subscribe directly to the blog. If you’re just linking to it from Facebook, you’re missing out on some of the best stuff.

I also welcome your comments.

And now, on to the series and whatever comes after that. I don’t know about you, but I’m not exactly finished yet.