Travel brochures sound so retro in a world of travel apps and websites. But they’ve brought us a bagful of happiness.

Before we left on our extended cross-country journey, I visited the tourism websites for many of the states we planned to visit. Most of them offered free printed brochures, which I ordered online. Over the next several weeks, as the brochures arrived at our Durham home, I placed them in a plastic bag in chronological order of when we would need them.

As I discussed in a previous post, we don’t have a detailed itinerary, wanting to remain open to serendipity. Instead, whenever we’re about to enter a new state, I reach into the bag, pull out the next brochure and get ideas about where to go. Most of the brochures — a word I use here to include larger booklets and magazines — are professionally produced and filled with helpful information. Many cities offer them, too.

I still use TripAdvisor and other online resources, but the brochures have been a great starting point, especially when I have a bad Internet connection or don’t want to stare at my laptop after a long drive. When we finish with them, I just toss them in a recycling bin. Travel books are helpful, too, but generally more than we need for places we’re typically visiting for just a few days.

As someone who spent 14 years helping to steer a university away from print and into the digital age, and who is enthusiastic about social media, I am surprised to find myself using a plastic bag stuffed with brochures. But many of our country’s state and city tourism offices are producing nice work, and it’s free, so I’m using it. For me, travel brochures are the new app.

Washington State is so much more than Seattle.

We’ve discovered that over the past couple of days as we drove west from Spokane to the Pacific.

I’d visited Seattle several times but had never ventured beyond the city to sample the state’s many other attractions.

In Spokane, we visited Riverfront Park, traversing several bridges across waterfalls that ripple through the heart of the city. We viewed the historic Looff Carousel and took a trip on the SkyRide cable car. Then we visited Manito Park, a magnificent botanical center with a Japanese garden, a rose garden and other attractions.

Next we visited the Grand Coulee Dam, which lived up to its reputation as an engineering wonder. The visitor center did a nice job of explaining how the dam was built and of addressing the competing pressures it faces to provide irrigation, flood control, fisheries, electricity, recreation and other needs.

Then it was on to Wenatchee, where we stopped at the Pybus Public Market, and to nearby Leavenworth, whose main street and shopping area are modeled on a Bavarian village.

Leavenworth was like a piece of Germany inserted into the Pacific Northwest — weird, to be sure, but nonetheless colorful and engaging. From there, we traversed Stevens Pass and braved the evening rush hour traffic to Seattle, where we are staying with friends in their wonderful condominium near the Space Needle, overlooking the city. 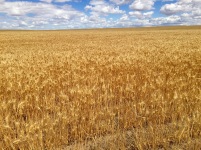 Throughout our journey, we passed wheat fields, canyons, cobalt blue lakes and other sites that reminded us anew how diverse our country is — and how beautiful.

Back in Cleveland, when we were at the Rock and Roll Hall of Fame, Champa and I watched a video of Billy Joel singing “New York State of Mind” along with Bruce Springsteen. It’s his love song to New York State, which is often overshadowed by its famous city. As we drove towards Seattle, I found myself thinking of that song, which perhaps applies here as well. In my own case, at least, I had never looked beyond Seattle to consider the state it’s in, even though the state shares its name with the city where I worked for more than two decades.

As Billy Joel might put it, I now know what I’m needing and I don’t want to waste more time. I’m in a Washington state of mind 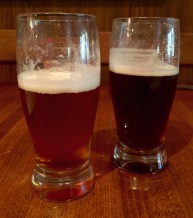 Moose Drool? Exactly. It’s a brown ale produced by Big Sky Brewing in Montana. Matt Benjamin, the owner of Sports Club, a restaurant in Shelby, served it to us when we dined there a few days ago. It had no hint of actual moose and was quite tasty. 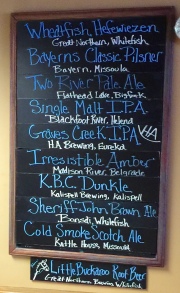 We’ve been exploring local beers throughout our trip, such as at the Buffalo Cafe in Whitehead on Thursday night. It features beers from several local breweries, including Great Northern Brewing, located just three blocks away, and Bonsai Brewing Project, located a mile away. “The Buffalo is proud to serve as an outpost for our area’s best breweries,” the menu proclaims. It goes on to note that Montana ranks third in the nation for breweries per capita. Here’s their chalkboard sign listing the brews available the night we visited. Note the root beer option at the bottom.

Coming from Durham, with its vibrant and ever-growing beer scene, we’ve enjoyed checking out the competition in the cities we’ve visited. We love what we’re seeing and tasting, but our heart still lies with Fullsteam back home.

We’ll do more exploring as our journey continues west to Seattle, then down to San Diego, and back home via Arizona, Texas, Louisiana and other southern states. If you have suggestions, please post them on our Facebook site or send us an email (djarmul@gmail.com). We’re drooling already. 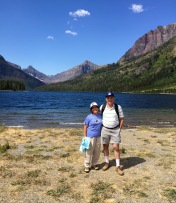 The fire burning in the eastern side of Glacier National Park has not deterred us — well, except for my shoes. With much of the park now closed there, we’ve shifted our focus to other sections.

Thursday we spent much of the day in the Two Medicine area in the park’s southeast corner. That’s where we shot this photo, standing tall for our hometown team, before hiking up to a scenic overlook.

The fire has shut down part of the famous Going-to-the-Sun Road, which cuts across the park. As a result, we and others now need to drive around the park’s perimeter to get from one section to another. The hassle is worth it, though, to spend time in such a stunning place.

We’re up near the Canadian border, which means it’s far cooler than in North Carolina. If we were back home, we would never have started a serious hike at noon. But here, we barely broke a sweat.

So all’s well for now … except for my shoes, a beloved pair of hiking shoes that I’ve owned forever. One of them finally died, disintegrating just as we ended the hike. I had no choice but to toss the pair and switch to my sneakers.

Rest in peace in the Glacier National Park trash bin, my leathery friends. I’ll treasure my memories of the paths we traveled together, concluding with this one:

A wildfire has scorched our plans.

We just arrived at Shelby, east of Glacier National Park, where we plan to travel tomorrow for three day of hiking. We were greeted with the news shown below.

The park’s east entrance, where we were going to enter, is closed, as is much of the park. The west entrance remains open for now.

Scramble, scramble, and not in the way we expected. Stay tuned.

The cowboy and cattle are real. We know because they strolled across our Montana highway this afternoon. We had to wait until they passed.

The stylized horse and rabbit are statues. We know because we saw them in a sculpture garden in downtown Des Moines.

We’ve seen so much since we left the Chicago area three days ago: The University of Iowa in Iowa City. The spectacular capitol building in Des Moines. A Lewis and Clark memorial overlooking Council Bluffs. A bustling evening scene in Omaha. The Corn Palace in Mitchell. Badlands National Park. Mount Rushmore.

What’s made an even bigger impression, though, is the land itself. Today we drove mile after mile through North Dakota and Montana, the blue sky towering above us, the range extending in every direction, the highway empty. Life in this part of America is so different from what we knew in Durham, much less in Washington. We just returned to our Big Sky Motel in Roundup, Montana, after eating at the Busy Bee Cafe, where the walls were decorated with cowboy art and Garth Brooks played in the background. Men wore cowboy hats in the booths. The cash register offered handicrafts from a local Indian tribe. 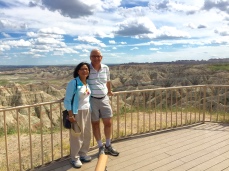 This is why we travel — not only to be surprised and awed by tourist sites that exceed our expectations, as happened at the Badlands (shown left). What stays with us even more is the the sensation of seeing life through new eyes, of being reminded that other realities exist beyond our own routines.

Tomorrow we finish this big stretch of the trip, ending up near Glacier National Park, where we hope to hike for three days. Then it’s on to Seattle.

Incidentally, our caption contest is now under way to write the funniest caption for our Blue Devil gnome, G, who we photographed this morning at Mount Rushmore. Get funny. Take a look at instagram.com/davidjarmul and submit your entry!

The contents of this website are mine and do not reflect any position of the Peace Corps, the U.S. Government or the Republic of Moldova.
"Not Exactly Retired" in Peace Corps Moldova and Back Home
Powered by WordPress.com.
%d bloggers like this: