You don’t have to look hard to find signs of the terrible earthquake that rocked Nepal on April 25, claiming more than 9,000 lives and injuring more than 23,000 other people. Both of these buildings in the Lubhu neighborhood of the Kathmandu Valley, where we hiked on Friday afternoon, suffered devastating damage and remain in rubble. People died here.

Even more people died in the nearby city of Bhaktapur, which shares the traditional brick architecture that proved so unstable in the quake. Bhaktapur is a World Heritage site and beloved tourist destination, with elegant temples and sculpted windows, but much of it was destroyed. Likewise, many towns and villages even closer to the epicenter are still struggling to rebuild, their situation worsened by Nepal’s ongoing political dysfunction. 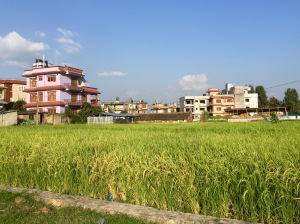 What’s striking for a visitor arriving five months after the disaster, though, is how the Kathmandu Valley simultaneously continues to boom and expand. I lived here for more than a year in the late 1970s and remember bicycling along idyllic fields and paths in neighborhoods now crammed with houses, shops, vehicles and pollution. The photo shows what has become a common sight: green fields being replaced by cement homes. Indeed, Champa and I are staying in a house that didn’t exist a few years ago, one of many transforming the local landscape. These newer structures generally fared better in the earthquake, although many did suffer some damage.

On Thursday afternoon, we walked to a modern shopping complex that sells everything from ready-made Indian food to Kellogg’s Corn Flakes, along with Western fashions, appliances and whiskey.

I rode up several escalators to buy a memory stick for my laptop — much cheaper than at Best Buy, thanks — and passed a display for luxury condominiums. (Let me pause: Luxury condominiums in Kathmandu. Wow.) Just down the road, these construction vehicles were finishing up another day’s work on a bridge.

I’m reluctant to draw any conclusions about the earthquake until we’ve visited other parts of the country and talked with more people. Despite the enormous destruction and human toll, however, it does seem the Kathmandu Valley is continuing to build and grow, for better or worse, regardless of what’s happening elsewhere.

We’ll be visiting some of those other places soon. But first, stay tuned for a visit to a fascinating temple rarely seen by Westerners. If you have any reactions to what I’m posting, I encourage you to share your thoughts here.

3 thoughts on “The Earthquake’s Aftermath”