I was a science writer for much of my career before serving as a volunteer with Peace Corps Moldova. Several months ago, the magazine editor for the National Association of Science Writers asked me to contribute an article for a series on “Science Writers Giving Back.” She just published it and I’m sharing it here, hoping it may inspire some readers — both science writers and others — to apply to the Peace Corps themselves. As the article notes, for me this decision “changed my life [and] broadened my perspective about the world, about America and about myself.”

Here’s a PDF file of the magazine; the article is on page 8.

Thanks to NASW’s Lynne Friedmann for inviting me to write this! 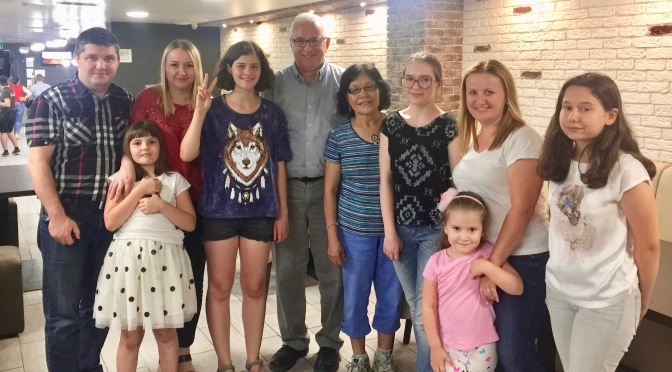 “Mr David, what happened to the American Government?”

That’s what Victoria, one of the students in the English conversation class I taught while serving as a Peace Corps volunteer in Moldova, asked me on Facebook last week. “I see news everywhere,” she told me. (That’s Victoria making the V sign at our group’s farewell dinner.)

I know what she means and the news has worried me even more. After spending more than two years in a little-known part of the former Soviet Union where people are deeply cynical about politics and the rule of law, I’m unnerved by what I’ve encountered in my own country since returning home this past summer.

Champa and I were proud to represent the United States when we arrived in Moldova with our group in mid-2016. That was before we had a president who disdains international alliances, demonizes refugees and calls developing countries “shitholes.” It’s possible his description didn’t include Moldova, whose population is white, but it seems even worse to me if it didn’t. As an American, was I supposed to be proud that I was serving in a country where people are poor but at least are white? 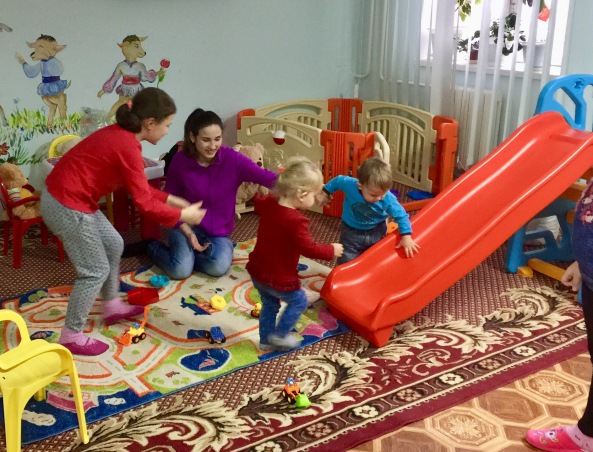 Michelle Obama championed the “Let Girls Learn” initiative that brought new opportunity to women and girls around the globe, encouraging more girls to go to school, start businesses and pursue careers. The initiative funded the Peace Corps grant through which our Ialoveni library was able to create a new family room, above, and programs for mothers and children. Just before we received the grant, though, we were told to no longer refer to the initiative as “let girls learn,” which was linked so closely to Michelle Obama.

I came to love Moldova during my service there and have recently gotten involved with a partnership program between Moldova and my home state of North Carolina. (Rodney Maddox and Lora Sinigur, who help run the program with Secretary of State Elaine Marshall, are shown left.) I continue to admire the perseverance and grace of Moldovans in the face of hardship. Despite its rich agriculture, Moldova’s economy offers few economic opportunities. Many people have left the country to seek work elsewhere. Corruption is widespread. Reform efforts have been thwarted.

The Moldovans I met are wonderful people who nonetheless have a dark view of life. In his book The Geography of Bliss, Eric Weiner called Moldova the unhappiest country on Earth.

The United States remains far wealthier but I fear we are heading in the same direction in terms of how we view our collective future. Since coming home, I’ve seen a level of cynicism that scares me. I don’t recall people ever feeling so anxious and frustrated about the possibility of change, even during the darkest days of the Vietnam War or the Watergate crisis.

This is not the America I knew when I left. Seeing it with new eyes has made the contrast sharper for me.

The midterm election gave me hope that Americans will not surrender to despair, that they will fight to once again make our country the kind of place we can all extol when living and traveling abroad. This past Sunday, Champa and I served lunch at a local soup kitchen with our friend Celeste, right, who also served in the Peace Corps, in West Africa during the Vietnam War. She reminded me how challenging it was to be asked questions then about America. Eventually things got better. I’m hopeful they can again.

I’m not speaking here for the Peace Corps, which is non-political and bipartisan. I also continue to hold the Moldovan people closely in my heart. It’s just that more than six months have passed since I completed my service and friends keep asking me what it’s felt like to come home.

My answer is that I don’t want us to become as hopeless and cynical as the people I met back in Moldova or, for that matter, in many other countries around the world where strongmen pursue their own interests, lies abound and darkness obscures light. I want us to trust each other again and embrace the optimism that is our birthright as Americans.

I want Victoria to keep watching because somehow my country is going to make things right.