If this video snippet that we shot along Route 9 in New Mexico looks like nothing more to you than an empty highway, look more closely. What you’re seeing is one of our country’s biggest controversies: its “unprotected” southern border.

We shot the video on Monday while driving from Tucson through Arizona and New Mexico into Texas, where we finally stopped for the night east of El Paso. (We’ve since moved on to San Antonio, to be followed by Austin and New Orleans.)

We expected this long drive to be highlighted by our morning stops in the tourist towns of Tombstone and Bisbee, as well as Douglas, all in Arizona. Instead, since we steered off Route 10 to travel along Route 40 and Route 9, we spent most of the day thinking about our country’s immigration controversy. (We traveled the route shown in blue on the map instead of the more conventional route shown in grey.) 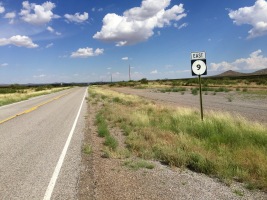 Route 9 straddles the U.S. border with Mexico, which makes it a focal point for the U.S. Border Patrol. It was pretty empty when we traveled it. Minutes might pass before we saw another car. Even though the road is in good condition and its speed limit is 65 miles per hour in most places, it didn’t attract many drivers.

What we did see was the Border Patrol, driving on the road, parked along the shoulder or otherwise making its presence felt. Champa and I kept count: along the 227 miles between Douglas and El Paso, we saw the Border Patrol 11 times.

After we entered El Paso, where Mexico’s Ciudad Juarez is so close you can almost look inside people’s homes, we continued to see the Border Patrol. For instance, we stopped at this checkpoint long after we passed through El Paso.

If you do the math, we saw the Border Patrol once every 20 miles or so. Of course, that’s only what we saw from the road. Presumably, there were many more Border Patrol vehicles closer to the border, not to mention aerial surveillance and who knows what else.

Is that a big presence, given the scope of the controversy? I claim no expertise and can’t even venture a guess, much less offer a solution for the complicated politics, ethics and other aspects of the immigration debate. All I know is that for us, two Americans from North Carolina, it was sobering to confront — and to ponder all the lives, resources and controversy represented by this glimpse. As we experienced earlier with Western wildfires and California’s drought,  we came face to face with an issue that had previously been an abstraction. Our road map didn’t list it but, yet again, we found it just the same.

2 thoughts on “Our ‘Unprotected’ Border”