Family, weddings, classes, projects, trips, a book and 73 episodes of Game of Thrones.

That’s what Champa and I have been doing since we returned to Durham from our Peace Corps service in Moldova one year ago this month.

We were especially busy initially — buying a car, restocking our kitchen and so forth — but our biggest challenge proved to be readjusting to the country we were so proud to represent when we left in mid-2016. We served for more than two years with the mission of helping others and promoting cross-cultural understanding. Then we came home to a new president who insults foreign allies and demonizes immigrants. It’s been a tough transition.

Of course, we’re thankful to be reunited with our family and friends. We’ve reveled in things as simple as driving or drinking water from a tap. Yet we still miss Moldova, every day. We made such good friends there and we now interact with them only on Facebook or with an occasional phone call. 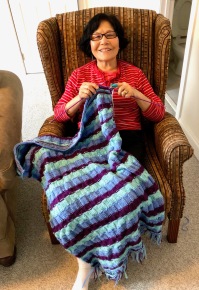 Champa and I didn’t expect our transition to be so hard. We’d traveled a lot. We’d remained closely connected to America while we were gone. I’d served in the Peace Corps previously and she was born in Nepal. So how hard could it be? We didn’t fully appreciate that America wasn’t the only thing that changed. We’d changed, too.

I’m not the same person I was when I walked away from a conventional job four years ago to pursue a new life of service and adventure. I’m now 66 and no longer want a full-time job. Nor do I want to be “retired.” Instead, I continue to explore a third path, this time back in our home town. During the past year, I’ve been refocusing my energies on three new activities: 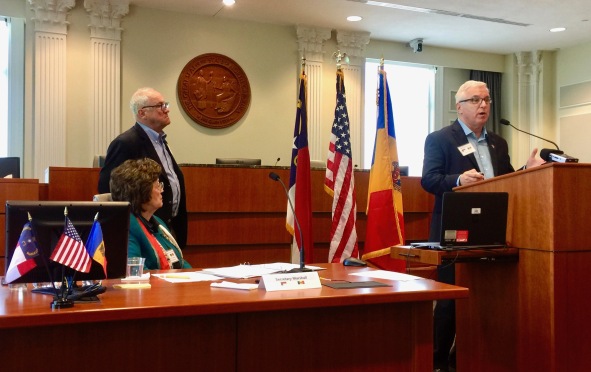 I also traveled to Romania to help teach a workshop on vaccines (above) and took two excellent adult-education courses with OLLI. Champa’s been working in her garden, pursuing art projects and spending time with family and friends.

We also attended four beautiful weddings and took short trips both domestically and abroad. We renewed our subscription to UNC’s Playmakers theater series and, after living without a television for so long, we binge-watched movies and television shows we’d missed, including the entire Game of Thrones series. (Bran won the throne, really?)

Most important, we welcomed a seventh grandchild to our family a few weeks ago.

So life has been good this past year and we know how fortunate we are to be able to say that, just as we were in Moldova. As I’ve begun pursuing this new phase of “not exactly retired,” I’ve been surprised to discover how disorganized our community is in taking advantage of older Americans like me who are eager to share their skills and enthusiasm to address social needs. I think it’s possible to make it much easier for them to do this, both in North Carolina and more widely. In future posts, I’ll be writing more about how I’ve begun working with others to address this opportunity. 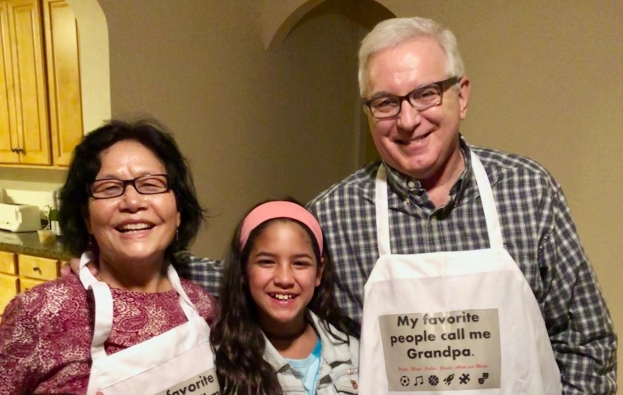 When Champa and I traveled to Scotland and Ireland three weeks ago, they felt a lot more like home than did Armenia, Ukraine and other places we visited while serving as Peace Corps Volunteers in Moldova. 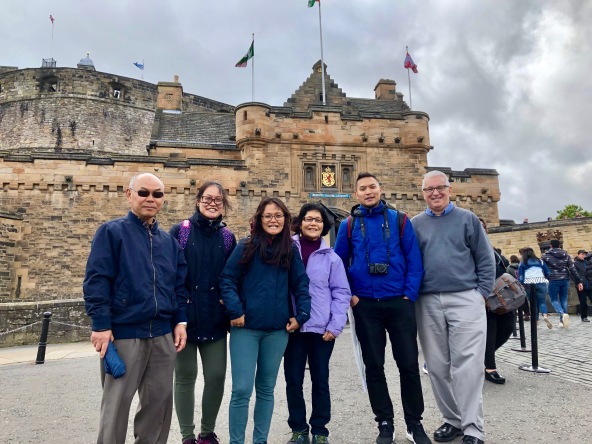 At dinner on our first night in Dublin, the pub menu featured burgers and the accents sounded like Boston. Our waitress asked where we were from and, after hearing we live in North Carolina, she said, “oh, my college roommate came from Raleigh.”

In Edinburgh, the dining options near our Airbnb included a Pizza Hut and a Five Guys burger joint along with haggis or fish and chips. 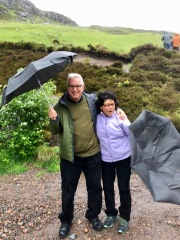 We couldn’t even escape President Trump during our trip. He came to Ireland shortly after us and we saw security patrols near his golf course.

For the two of us, Scotland and Ireland were the flip side of what we experienced on the opposite side of Europe.

When we took a free walking tour through the historic streets of Romania’s capital, Bucharest, we were the only Americans. In the Bulgarian capital, Sofia, only one other American joined us and 23 tourists from Bulgaria, Canada, Italy, Japan, Latvia, Netherlands and Spain. Even in Tbilisi, the Georgian capital that’s been gaining buzz as a tourist hot spot, we felt alone. As I wrote then, a big world awaits beyond the American comfort zone.

Scotland and Ireland didn’t feel exotic to us, in other words, but we loved both of them.

We went first to Scotland, to hang out with some of our Nepalese relatives (top photo) who took the train up from their home in England. Together we toured Edinburgh Castle, the National Museum of Scotland, the Royal Mile and more. We discovered a Nepalese garden at the botanic gardens and a nice coffee shop at the Port of Leith. After our relatives left, Champa and I hiked atop a local peak, Arthur’s Seat, and had dinner with an old friend and his wife.

Then we took a two-day tour of the highlands, visiting Loch Ness and other sites. We were entranced by the striking bogs, heather and thistles despite pouring rain.

Then it was on to Ireland. Our tour there traveled west from Dublin to Galway and then down the Atlantic coast. Using Killarney as a base, we explored the Cliffs of Moher, the Dingle Peninsula, the Ring of Kerry and other landmarks.

Then we turned east, stopping at Blarney Castle to, yes, kiss the Blarney Stone, before continuing on to Kilkenny and Dublin. On our first night back in the capital, we spent hours watching the Irish Celts play traditional music at Darkey Kelly’s pub. Finally, on our last day, we walked throughout the city before returning exhausted to our hotel near Christ Church Cathedral, ready to fly home the next morning.

As always, we were surprised by some of what we saw, such as a sheep-herding demonstration in Kerry that you can glimpse below in a brief video I produced on my phone the same evening (also available on YouTube). We learned a lot about the histories of Scotland and Ireland, especially their struggles with England. 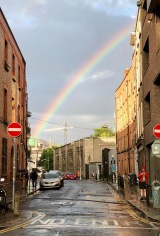 We gained new perspective on our many American friends whose families emigrated from there. Their ancestors escaped oppression and found a better life, much like my own or, for that matter, the Lyft driver from Aleppo, Syria, who drove us to the airport.

In both Scotland and Ireland, we traveled in small groups with Rabbie’s Tours, which provided excellent guides and organization.

We were reminded throughout our time there that you can have a wonderful trip outside the United States even if you don’t stretch your comfort zone much. Just like other destinations familiar to Americans, Scotland and Ireland let you experience something different while still feeling at home. They’re comfortably foreign.