A podcast for librarians and a newsletter about Nepal both published stories Tuesday about my new book. A day earlier, a podcast on “career pivots” highlighted it, as have other outlets over the past month.

It’s been a strange time to release a book about travel and the Peace Corps. The coronavirus outbreak has been devastating and Peace Corps Volunteers were recently evacuated worldwide. Like many of you, I have been staying home and feeling grateful to the medical responders and others who are working so tirelessly on our behalf.

If you’re ready for a distraction while we await better times, here are links to some of the stories that have appeared in places that focus on retirement and career changes, which are more numerous than I knew previously. You’ll find more links on the book’s Facebook page.

Born to be Boomers 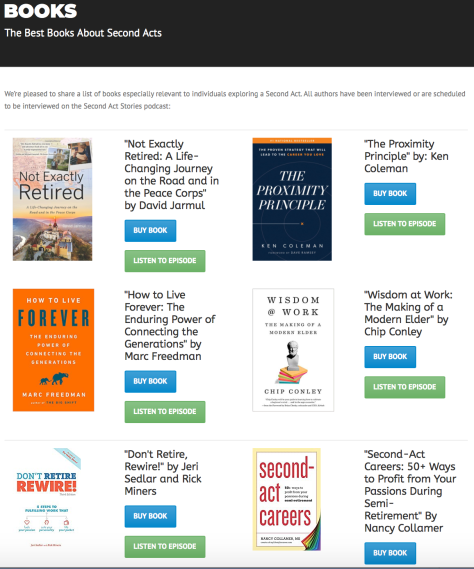 These and other outlets are helping older Americans think about the changing nature of retirement and their own futures. There are good books, too, including those on Andy Levine’s list of The Best Books About Second Acts. Not Exactly Retired now appears there along with my own favorite, my sister Nancy’s excellent Second-Act Careers: 50+ Ways to Profit from Your Passions During Semi-Retirement.

Visit the book website to see reviews, trip photos and more, along with links to indie bookshops, Amazon and other places where you can order Not Exactly Retired in paperback or electronically. If you’ve read and enjoyed it, please post a review online!

Most important of all: Stay safe, everyone.

More than 7,000 Peace Corps Volunteers from around the world arrived recently in North Carolina and other states after being evacuated because of the coronavirus.

They need our help — and they have something to teach us.

The volunteers have returned to Greensboro from Ukraine, to Raleigh from Malawi, to Cary from Panama and to Asheville from Ethiopia. They’ve come from South Africa, Guatemala and elsewhere — 61 countries in all. It’s the first time the Peace Corps has evacuated its volunteers worldwide.

The North Carolina Peace Corps Association, like its counterparts across the country, has been organizing to assist the evacuees, few of whom have jobs lined up. They don’t receive unemployment benefits and their health insurance is temporary.

Of course, millions of other Americans are out of work, too, wondering how they’re going to buy food and pay their rent. The Peace Corps evacuees share this economic stress along with having suddenly left distant villages where they were assisting teachers, organizing health projects and working in other ways with some of the world’s poorest communities. Now, after a difficult trip, they’re back home, maybe still under quarantine.

They may not be ready yet to focus on a job hunt or to hear how lucky they are to eat barbecue again. Many of them didn’t want to be here, at least not yet.

I can only imagine how they feel. When Champa and I returned to North Carolina from our Peace Corps service in Eastern Europe two years ago, after months of preparation, we needed time to readjust to things as simple as drinking water from the tap. We were happy to be reunited with our family and friends but missed our Moldovan friends.

Peace Corps Volunteers are renown for their resilience but those who were just evacuated could use some help. Even with everything else going on, other Americans should look for ways to assist them. The Peace Corps itself needs political support and resources to respond appropriately. (An online petition calls on the federal government to provide the evacuees with appropriate benefits.)

In return, these newly returned volunteers have a valuable perspective to share at this moment of worldwide anxiety.

They’ve just been living alongside people in other countries, so can help us see how the world is more connected than “us” and “them,” especially during a global crisis. Our country is not alone in facing extraordinary medical challenges and economic disruption, and it has greater resources than the countries where volunteers were serving.

The Peace Corps also exemplifies the human power of service, as millions of North Carolinians have been demonstrating recently, most notably with our heroic medical teams and first responders. More broadly, people across our region have been stocking grocery shelves, working at pharmacies or just staying home to reduce transmission rates. They are ordering meals to support local restaurants, checking on elderly neighbors and helping in other ways. The crisis has brought out the best in them.

In other words, Peace Corps Volunteers aren’t different from other Americans. They are just one example of how we all can enrich our own lives while serving others.

Champa and I began our Peace Corps service when we were 63 years old. We were among the hundreds of older Americans who join every year. The two of us ended up having a life-changing experience and feeling like we accomplished a lot. Thus, a final lesson, especially for people nearing retirement, which is to be unafraid about redefining your life and following your heart to pursue the Peace Corps or some other dream. As I discuss in my new book, you never know what might happen tomorrow.

Like a quarter-million Americans since President Kennedy started the Peace Corps in 1961, the volunteers and trainees who just came home answered our country’s call for service. I hope people in North Carolina and across the country will reach out, thank them, lend a hand and then listen to their stories.