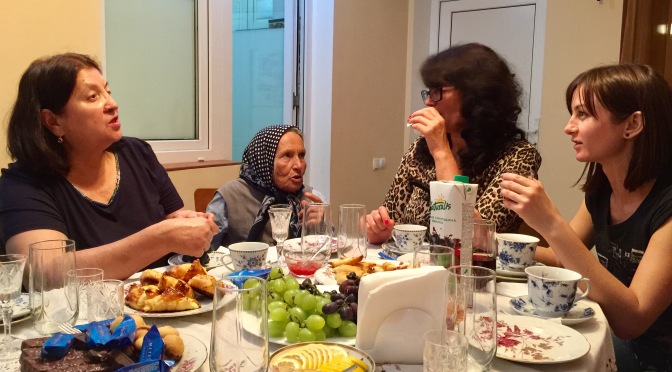 Linguists study American greetings like these. Gender scholars analyze how people speak to women. As a former New Yorker, I had to learn to say “Sir” and “Ma’am” when we moved to the South.

So I shouldn’t have been surprised by “Domnul” and “Doamnă” here in Moldova. Domnul means sir in Romanian. Doamnă means ma’am.

But it’s not as simple as that.

Here in Moldova, the tradition is to say “domnul” to any adult man regardless of his marital status. But one says “doamnă” only to a married woman, making “doamnă” a bit like “Mrs.” but not always followed by a name. “Domnișoară” means Miss. There’s no equivalent of Ms.

When you approach a man, you say, “Domnul!” That’s often true even if you know the person well. For instance, I’m very friendly with our host father, Mihai, who is a few years younger than me.

When I first see him, I typically say “Bună ziua (hello) domnul.” Once that’s out of the way, I switch to Mihai or the more familiar Misha.

Likewise with his wife, Nina. When I first see her, usually in the evening, I say, “Bună seara (good evening), doamnă.” After that, I may call her Nina, although I sometimes keep saying doamnă.

Mihai and Nina have two adult children at home. I call them by their first names, Alisa and Andrei. (That’s Mihai, Alisa and Nina with us in the top photo.)

If I’m in a shop or the outdoor market, I use domnul and doamnă.

On top of all this, there are two forms of “second person” in Romanian — the formal usage for adults and a familiar form for children, family members and friends.

As for greetings in the opposite direction: My colleagues and students call me “Domnul David,” pronouncing David more or less like back home, although some say Dah-veed. Champa’s colleagues call her Doamnă Champa or just Champa. Most of her students call her Miss Champa.

As a whole, these salutations remind me a lot of what I found in North Carolina. I’m still looking, though, for the Moldovan equivalent of y’all.