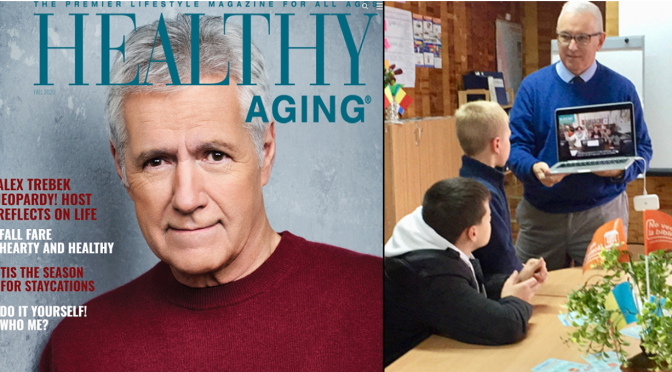 I was pleasantly surprised a few days ago when an article I wrote appeared in a magazine with Alex Trebek on its cover.

Little did I know that the famous Jeopardy! host would die on Sunday at age 80 after a long struggle with pancreatic cancer.

I admired Alex Trebek and loved his show, so now feel honored to appear in the same magazine with words that echo his inspiring message. My own article encourages readers to “dream differently” as they age and to consider the Peace Corps and other volunteer experiences that may challenge them — challenges less intense than cancer, to be sure, but meaningful in their own ways.

These experiences aren’t easy, I write in my article. “You struggle. You get lonely. You reexamine your beliefs and life goals.” Yet they also can transform how older Americans view themselves and their place in the world.

“Now that we’re back home in North Carolina, the two of us treasure our Peace Corps memories,” the article concludes. “We have renewed appreciation for our many blessings as Americans and greater empathy for the billions of people around the world whose lives differ from ours. We know we touched the hearts of our Moldovan friends, just as they touched ours. We still don’t have a boat or a golf cart, but our lives are richer than ever.”

I wrote the article several months ago, just as the pandemic began spreading across the globe. When the Peace Corps withdrew its volunteers worldwide, for the first time ever, the editor decided to hold off on publishing it. (The Peace Corps plans to resume its operations when conditions allow.)

Here is a PDF file of my Healthy Aging article.

The article highlights one of the main themes of my book, Not Exactly Retired: A Life-Changing Journey on the Road and in the Peace Corps, which was published by the Peace Corps Writers imprint on April 2. Although the pandemic derailed some planned publicity for the book, numerous articles, podcasts and other media have still featured it, as you can see on this Facebook page. The book website has links to buy the book from independent bookstores, Amazon and elsewhere.

If you want to learn more about Healthy Aging, the magazine is offering a discount to Not Exactly Retired readers — $15 off its regular subscription rate of $24.95. Use the promo code author10 at its online subscription page.