One of the things for which I’m most grateful about serving in the Peace Corps is how it’s made me less fearful about traveling to places that seem exotic or dangerous to some Americans even though they’re actually safe, beautiful, fascinating and cheap.

I’ve been reminded of this during our recent trips to countries near Moldova, where Champa and I are serving as volunteers.

This past week we visited Sofia and Bucharest. If we’d traveled instead to London, Rome or Barcelona, we probably would have seen Americans on every corner. But in these two cities we saw very few.

The photo above shows what I mean. The tourists are listening to the guide in the purple coat, who led us on a free walking tour through Bucharest’s old town, which is filled with lovely churches and Parisian-style architecture. They came from Australia, Canada, Germany, India, Italy, Netherlands, Russia and Serbia. The only Americans were Champa and me.

Here’s a photo of another walking tour we took, this one through the heart of Sofia, where we received a fascinating history lesson from the woman with the blue bag. We viewed beautiful churches, a mosque, a synagogue, the presidential residence, the former Communist Party headquarters and more. Joining Champa and me were 23 other tourists, who came from the Basque region, Bulgaria, Canada, Italy, Japan, Latvia, Netherlands and Spain, plus one other American. 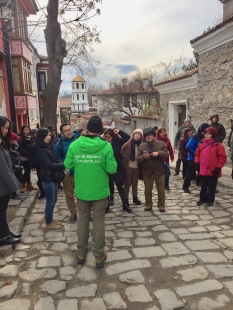 The same was true on our tours of Bulgaria’s Boylan Church and Rila Monastery,  and of the ancient city of Plovdiv, the country’s second largest. You can see these above. The only American in the photos is Champa.

Likewise when we visited Armenia and Georgia a few months ago, shown below, touring monasteries and ancient sites in Armenia and Georgia’s capital city, Tbilisi. The only other American in our groups was a software engineer from Boston who came to learn about his Armenian roots. The others hailed from China, Dubai, Germany, Italy, New Zealand, Philippines, Russia and other countries. All of our tours were in English, with the Armenian and Georgian guides also speaking in Russian.

It’s possible we just happened to be in groups without Americans. Certainly I didn’t expect to see swarms of American tourists in these Eastern European countries, as I might have in Cancun, San Juan or Toronto. Americans who search for flights to Europe look first to London, Paris and Rome, and to familiar places such as Dublin, Madrid and Frankfurt. Destinations in Central Europe such as Prague and Budapest have become popular, too.

Moreover, people travel abroad for many reasons. The two of us enjoy exploring new cultures but others prefer shopping, fine dining or resorts, or hiking, or visiting friends, pursuing a special interest or something else. A 2015 New York Times article said “nearly half of overseas travelers are from the East Coast, and they make trips within the Western Hemisphere or to Western Europe, to places that are more affordable and easier to reach (with shorter and direct flights) than those farther afield.” Tourists from other countries have their favored destinations, too. 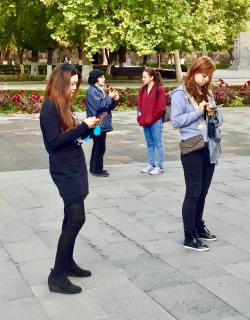 Fair enough, and I certainly understand why so many Americans love visiting London or Paris, since I enjoyed these cities, too. Even these tourists are more adventurous than Americans who won’t venture further than a summer beach house. Moreover, millions of Americans lack the resources to do even that and can only dream of foreign adventures. I know how lucky Champa and I have been to pursue our lifelong passion for travel.

I also know serving as an older Peace Corps Volunteer in Moldova now affects my perception of what’s interesting and reasonable. But for goodness sake, I’m not suggesting Americans forego the Eiffel Tower to visit North Korea. I just wish more of them were joining all of the other foreign tourists we saw in experiencing these amazing countries instead of defaulting to the same predictable list, like ordering only vanilla or chocolate ice cream cones in a shop offering many flavors.

Serving as Peace Corps Volunteers, living and working in an unfamiliar culture, has made us even more comfortable with travel alternatives. But you hardly need to have served abroad to expand your horizons a bit, especially with so many companies now offering trips to “exotic” destinations and the internet making it easy to find reputable local travel companies and guides for almost any budget. 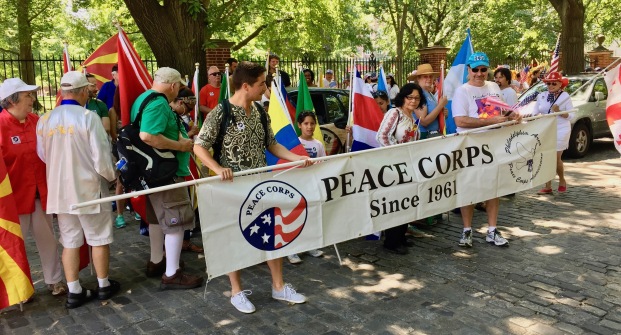 Champa and I hope to keep exploring both familiar and less-familiar destinations in the years ahead, assuming our health and circumstances make this possible. Our current wish list includes Sri Lanka, the Baltics and other places we can visit easily with a limited budget, just as we have recently.

I hope we’ll see some of you out there or perhaps somewhere else off the beaten track. There’s a big world waiting beyond the American comfort zone.

8 thoughts on “Beyond the Comfort Zone”