While Americans were commemorating Martin Luther King, Jr. on Monday, many Moldovans were celebrating the birthday of Mihai Eminescu.

If you don’t know recognize his name, well, at least one of my work partners didn’t know who Dr. King is. She and others at the library, some of whom had heard of him, were more interested in the birthday of our colleague Raisa, who you see receiving flowers.

We celebrated Raisa with a big lunch and the singing of both “Happy Birthday to You” and La mulți ani trăiască. 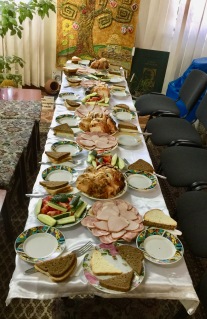 It was my latest reminder that even though Dr. King is a hero of mine and many other Americans, our country is not the center of the universe, as much as we might like to think otherwise. To be sure, Dr. King is known and honored in many parts of the world, which is richly deserved, but people everywhere generally care most about their own lives and communities. 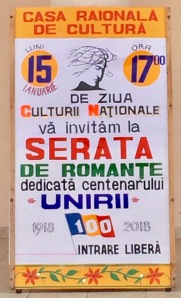 A few days ago, a friend back home wrote to ask whether Moldovan newspapers were coming up with their own phrases for “shithole.” I was sorry to disappoint him: Not a single Moldovan friend has mentioned the recent controversy to me. Keep in mind that I work with librarians and other friends who are well-educated. Undoubtedly some Moldovans have been following the controversy, but the ones I know don’t care about American politics unless it affects them personally, which it rarely does. At least they know where America is, which is more than most Americans know about Moldova. 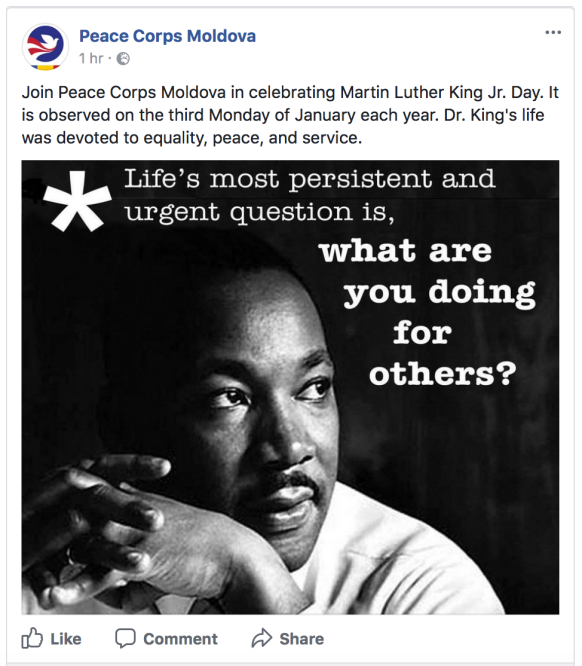 As you’ve probably guessed from the photos by now, Mihai Eminescu was a famous poet, perhaps the greatest ever to write in the Romanian language. He is beloved by many Moldovans not only for his beautiful work but also as a symbol of the cultural ties between Romania and Moldova, which was part of Romania until it was taken over by the Soviet Union. Ialoveni organized a big show in his honor on Monday evening, featured in the poster you see above.

So that’s the story of Martin and Mihai … unless, of course, you live elsewhere in the world. In that case, feel free to replace Mihai with someone from your country.

2 thoughts on “Martin and Mihai”