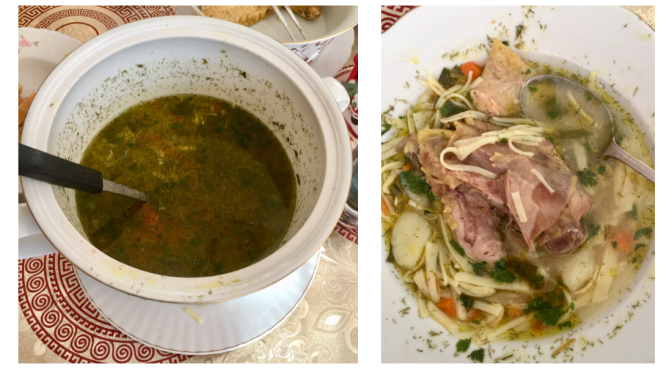 There’s no better way to celebrate Christmas than with a big, steaming bowl of chicken noodle soup.

Our host mother, Nina, prepared the soup on Sunday as a traditional dish for Orthodox Christmas, which comes two weeks after December 25. That’s Nina below behind the tureen filled with the delicious soup, which tasted like what my grandmother used to make for us when I was a kid.

My Grandma Sarah was born near Odessa, Ukraine, not far from Moldova, as I described in a previous post. Many of the foods I’ve seen in Moldova resemble what she used to serve at our family gatherings in New York. Her stuffed cabbage, for instance, was similar to Moldovan sarmale, although with beef instead of pork. Champa helped make the sarmale you see in the photo above.

Sunday’s baked chicken, pickled vegetables and salad all looked familiar, too. I made an apricot bundt cake with jam I bought in Sofia last week.

We also had a plate of Romanian cookies and American Oreos, which we found in a store in Bucharest.

Many Moldovans also celebrate Christmas on December 25, as well as New Year’s, so the past two weeks have been filled with celebrations. (While I’m writing this on Sunday night, a neighbor’s fireworks are exploding outside my window.) 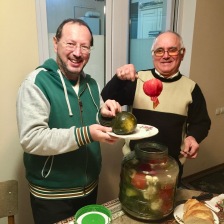 Our host family generously invited us to join two Christmas feasts this weekend, together with their niece and the couple you see here. That’s Liviu in the green jacket showing us a pickled tomato and watermelon with our host dad, Mihai. Viorica sang several songs after dinner, with the voice of an angel, as you can hear in the brief video below, with Nina continuing to bring out more food for us.

So to summarize: chicken soup for the Christmas soul, an angel and childhood memories brought to life. There was no better way to celebrate.

Churches and monasteries across Moldova were destroyed or severely damaged under Soviet rule. Today many are flourishing. We recently visited three of the country’s most famous and beautiful monasteries with a group of Peace Corps volunteer friends. 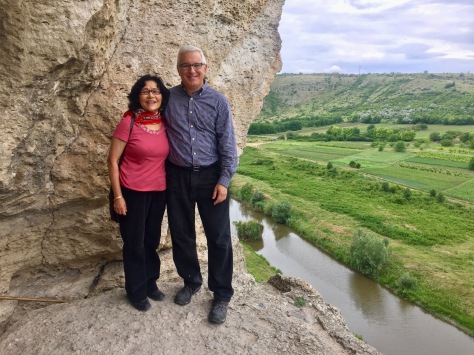 Orhei Vechi, Curchi and Tipova are quite different from each other but are all powerful illustrations of the importance of faith in Moldova, especially the Orthodox Christianity practiced by most people.

Orhei Vechi, or “Old Orhei,” above, is Moldova’s most famous site. Located less than an hour’s drive from Chisinau, it is both a church and an archaeological complex, with caves, grottos and religious structures that reflect different civilizations. They are situated on promintories overlooking a spectacular view.

The Curchi Monastery was founded in the 1770s and became one of the largest monasteries in Moldova. Foremost among its buildings is the imposing red baroque church you see here, dedicated to the virgin birth. When we visited, we were lucky to hear a priest ring the church’s bells and fill the air with music. 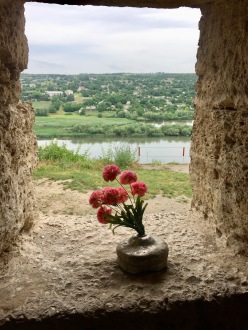 Located along the Dniester River, the Tipova Monastery has a lovely church dedicated to the Assumption of the Virgin Mary. Much older and even more striking are the cave monastery and stone cave cells reached after walking down a steep path. A community of monks worshipping here dates back centuries.

Hiking down to see the cave monastery at Tipova took our breath away. For that matter, so did all three of the monasteries.

Our neighbors ate, drank and shared memories a few days ago in a place that may surprise you: the local cemetery.

They were there for Paştele Blajinilor, or Memorial Easter, a week after Orthodox Easter. Like families across Moldova, they gathered at the graves of their loved ones, placing flowers and food besides the tombstones, lighting candles and enjoying a meal together. 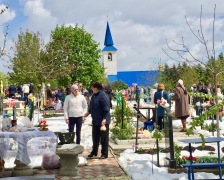 The photo on the left shows what the cemetery at the Biserica Acoperământul Maicii Domnului in Ialoveni usually looks like. On the right is the same cemetery on Monday, when Champa and I visited.

We saw dozens of families spreading containers of food and bottles of soda, wine and cognac on tables or cloths near the graves. They had traditional local foods along with colored eggs and special bread. A priest circulated to say prayers. Families visited with their friends and neighbors, sharing food and wine as they remembered grandparents, parents, spouses and others.

They dribbled wine on the graves and left behind food and candles. The mood was friendly but subdued and respectful.

Our host family was out of town visiting the village home of our host mother. Yet we felt welcome among everyone we saw. The woman in the middle of the photo with Champa knows us. She and her daughters stopped us as we were wandering around and insisted we share some food and wine with them. They also gave us a small gift bag with treats inside. Many families also use this occasion to donate food and small gifts to the poor. 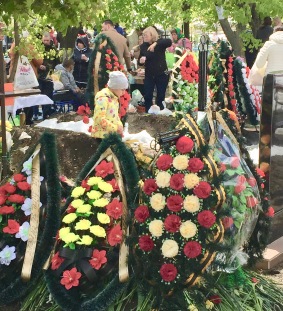 Paştele Blajinilor, which traces it origins back to pre-Christian times, is celebrated widely in Moldova and parts of neighboring Romania. It reminded me of the Mexican holiday Día de los Muertos, although the religious significance is quite different since it coincides with Easter instead of Halloween.

The church you see here is on a hill on the other side of Ialoveni from where we live. As usual in Moldova, we traveled there on foot, walking about 9 km. roundtrip on roads still slick and muddy from a recent spring snowstorm. The trip was worth every step. We were moved by what we saw and felt privileged to take part in such a memorable event, a picnic in a cemetery to feed your soul.

One of the joys of being a Peace Corps volunteer, here in Moldova and around the world, is that you never know what’s going to happen next. You’re surprised regularly by holidays and events that people forgot to tell you about.

The four people you see in the video above proved this again on Friday evening when they appeared unexpectedly at our home in Ialoveni. [The video is also on YouTube.]

As you can see, they chanted and sang after our host mother, Doamna Nina, invited them into the living room. (That’s Nina in the video between Champa and our grandmother, or Bunica.)

It turns out our visitors were celebrating St. Vasile, or Basil the Great, a religious figure born in the year 329. He lived virtuously, established monasteries, served the poor and was canonized by the Orthodox Church shortly after his death.

On the evening of his special day, children across Moldova walk from house to house to sing carols and chants in his honor. The holiday coincides with the Orthodox Christian new year, which occurs shortly after our own new year back home.

Nina gave them all fruit, candy, money and loaves of the traditional round braided bread called colac. She was very generous, and we contributed something, too. Our visitors made out well.

As they left, the older woman you see in the photo crossed herself and then wished Champa and me good luck in the new year.

On Sunday, as Americans prepare to celebrate the birth of Martin Luther King Jr., people here will commemorate the birthday of Mihai Eminescu, a famous Romanian poet. This time I plan to be ready. Well, at least until Monday, when some Moldovans will celebrate still another holiday, this one involving howling wolves. I’m still unsure about that one.