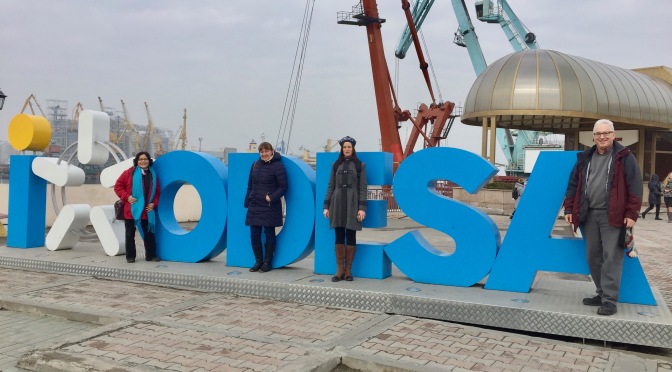 There’s a new epilogue to the story of a girl from Odessa who fled with her family to America in the early 1900s to escape the pogroms that were killing and persecuting Jews in Ukraine and others parts of the Russian empire.

That girl was my grandmother, Sarah.

On Saturday, Champa and I visited Odessa to pay our respects to Grandma Sarah’s memory while touring this great Black Sea port city. I was the first of her children or grandchildren to return in the many years since Grandma Sarah’s family — my family — arrived with nothing at New York’s Ellis Island. She used to describe their journey as resembling this closing scene from “Fiddler on the Roof,” a film she loved:

Champa and I hired an excellent driver, Marcel,  to make a long day trip there with our host sister, Alisa (wearing the blue Odessa souvenir hat), and her cousin Natalia.

We left Ialoveni early, crossing the Moldovan-Ukrainian border at Palanca since Peace Corps does not allow volunteers to travel through the disputed territory of Transnistria. We were lucky to arrive near Odessa’s opera house, shown behind us, just before a noon performance of Tchaikovsky’s “Sleeping Beauty” was beginning. 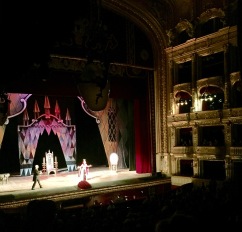 We bought the cheapest seats, less than 40 cents apiece, so we could glimpse the theater for a few minutes. It was magnificent.

We then walked to another local landmark, the Odessa Steps that figure prominently in the famous scene from Sergei Eisenstein’s 1925 film Battleship Potemkin, shown in the following clip. On one side of the steps is a plaque honoring their cinematic significance; on the other is a funicular we rode to ascend after visiting the port below, a major freight and passenger transportation hub for Ukraine.

Throughout Odessa’s central area we saw beautiful buildings, parks, shops and statues commemorating figures such as Catherine the Great (below) and Duke de Richelieu, the French-born governor who helped Odessa grow to become the third largest city in the Russian empire. We thought of our two daughters-in-law when visiting the “Mother-in-Law Bridge” and ate a late lunch of traditional Ukrainain food at Kumanets.

We ended our trip with a visit to Odessa’s largest synagogue, where I left a donation in my grandmother’s honor. It had taken more than a century but one of her descendants had finally made it back to revive her memory in this fascinating city, which we really enjoyed visiting. 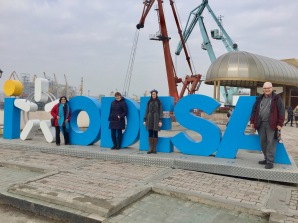 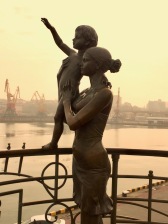 There’s no better way to celebrate Christmas than with a big, steaming bowl of chicken noodle soup. 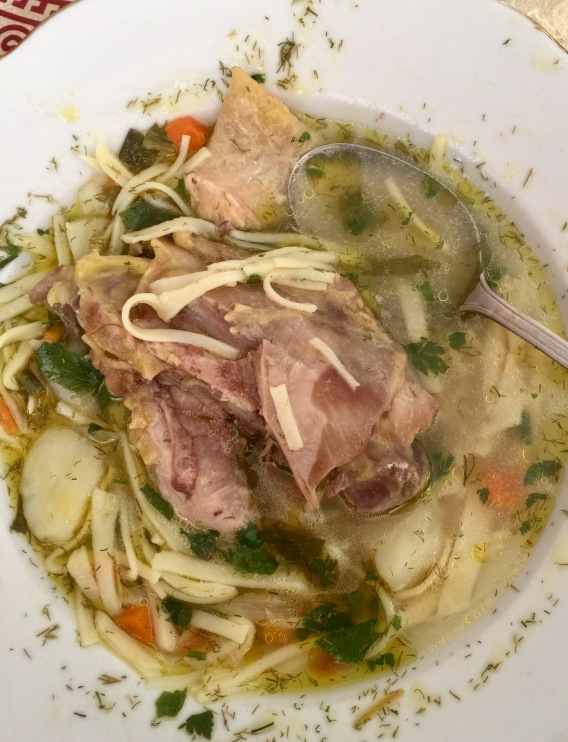 Our host mother, Nina, prepared the soup on Sunday as a traditional dish for Orthodox Christmas, which comes two weeks after December 25. That’s Nina below behind the tureen filled with the delicious soup, which tasted like what my grandmother used to make for us when I was a kid.

My Grandma Sarah was born near Odessa, Ukraine, not far from Moldova, as I described in a previous post. Many of the foods I’ve seen in Moldova resemble what she used to serve at our family gatherings in New York. Her stuffed cabbage, for instance, was similar to Moldovan sarmale, although with beef instead of pork. Champa helped make the sarmale you see in the photo above.

Sunday’s baked chicken, pickled vegetables and salad all looked familiar, too. I made an apricot bundt cake with jam I bought in Sofia last week.

We also had a plate of Romanian cookies and American Oreos, which we found in a store in Bucharest.

Many Moldovans also celebrate Christmas on December 25, as well as New Year’s, so the past two weeks have been filled with celebrations. (While I’m writing this on Sunday night, a neighbor’s fireworks are exploding outside my window.)

Our host family generously invited us to join two Christmas feasts this weekend, together with their niece and the couple you see here. That’s Liviu in the green jacket showing us a pickled tomato and watermelon with our host dad, Mihai. Viorica sang several songs after dinner, with the voice of an angel, as you can hear in the brief video below, with Nina continuing to bring out more food for us.

So to summarize: chicken soup for the Christmas soul, an angel and childhood memories brought to life. There was no better way to celebrate.