The recent visit of the U.S. ambassador and Peace Corps guests to see the beautiful new costumes at Champa’s school was featured in a national television story, on a local news site and in the latest issue of Ialoveni’s monthly newspaper. (A translation of the newspaper article follows below; my previous post features a video about the event.)

TVR Molodova covered the costume event with this story (also available on YouTube):

The news site Ialoveni Online covered the events with the story excerpted below (in Romanian). You can use Google Translate to translate it online, if needed.

The city’s monthly newspaper published two articles, both shown here. The first is about the ambassador’s discussions at the primăria, or city hall, which followed the costume event. The second, which I’ve translated below, is about the costume celebration and earlier library visit by Peace Corps guests, and about the work the two of us have been doing in Ialoveni.

Thank you again — vă mulțumim frumos! — to our extraordinary partners at the school and the library who made all of this possible and were so welcoming to their American guests. 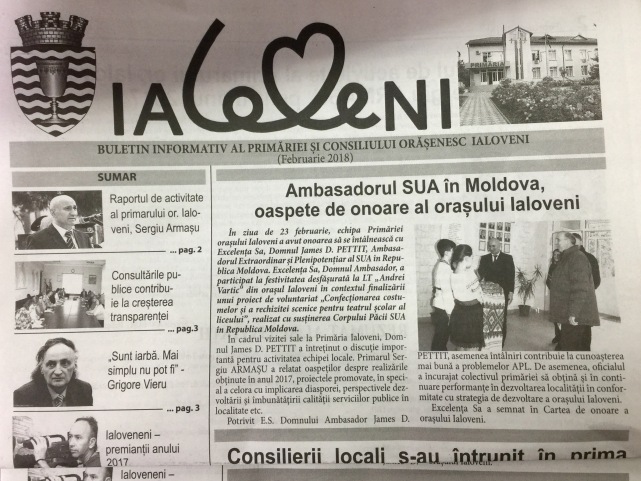 Theoretical High School Andrei Vartic in Ialoveni had a gala festival to launch a volunteer project by its students, parents and teachers with support from the U.S. Peace Corps and volunteer Champa Jarmul.

Attending the event was his Excellency James D. Pettit, the U.S. ambassador to Moldova. The project produced 43 costumes that can be used by actors in dramatic presentations. The event featured a series of short scenes in which student actors presented heroes from the works of Shaespeare, V. Alecsandri and I. Creangă.

The celebration honored the volunteers. Thanks were expressed by school director Valentina Sacara and project coordinator Ana Doschinescu to all those who contributed to making this dream a reality.

A delegation from Peace Corps Moldova led by director Tracey Hébert-Seck visited Ialoveni’s Petre Ștefănucă public library. Peace Corps Volunteer David Jarmul presented some of the library’s activities, such as its robotics club, “Bebeteca” children’s room and infographics. The guests were impressed by the many activities carried out in collaboration with the volunteers.

Library director Valentina Plamadeala thanked David and Champa Jarmul for their diverse cultural activities at the library and in the community, for the beautiful projects they brought to Ialoveni and for their hours of English language training at the library.

On Friday, the U.S. ambassador and other guests celebrated the new costumes Champa and her Ialoveni school partners created over the past several months — a colorful and emotional day we will never forget. This video is also on YouTube.

Cowboys, Indians, pirates and other characters have begun arriving at Champa’s school. Her grant project to create a costume and prop wardrobe for its drama program is progressing nicely, with many of the costumes now completed.

The school, LT “Andrei Vartic” in Ialoveni, Moldova, recently received its first batch of stage props, including some great hats. As you can see in these photos, Champa and I had fun trying them on with her project partner Ana Doschinescu, in the white and blue dress, and another teacher, Tamara Vîrlan.

Ana, Tamara and Champa can’t wait until the project is completed and students start using the props and costumes on stage. We’ll keep you posted. 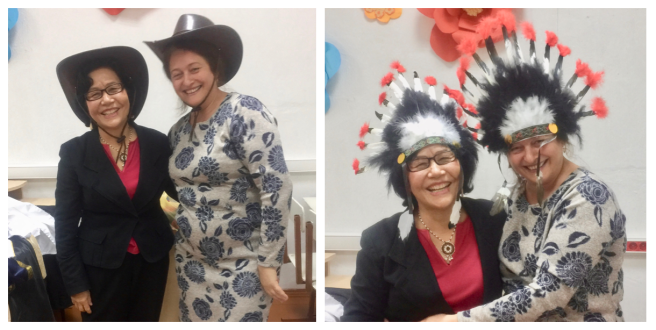 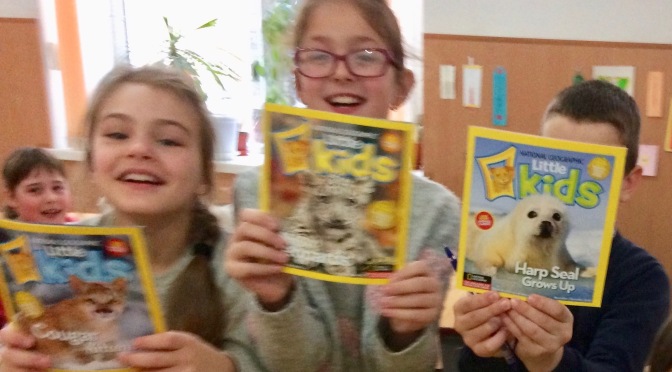 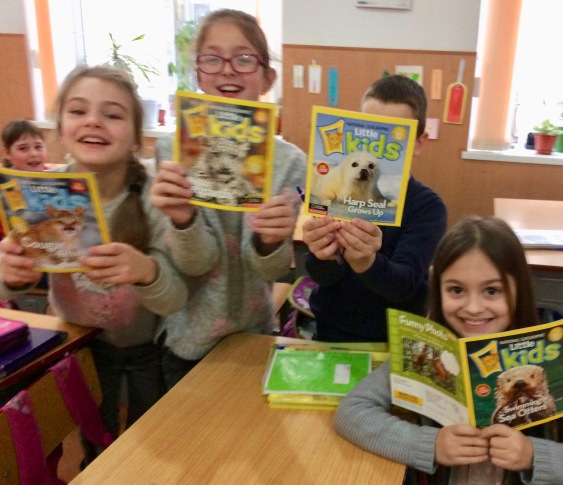 These kids have a good reason to look so happy. On Monday afternoon, they were among the first students at Champa’s school to enjoy a big box of English-language books that just arrived.

The two older students in the second photo enjoyed the books, too. The box included everything from illustrated children’s books to short story collections.

The school got them all for free. Champa requested them from Darien Book Aid, a nonprofit organization in Connecticut that’s been sending free books to developing communities since 1949. Its volunteers currently ship 20-30 boxes each week, or nearly 20 tons annually, to 190 countries and across the United States.

Maureen Shanley, a former Peace Corps volunteer in Colombia, picked out and packed the books for Champa’s box, along with a personal note. Maureen is also active in Connecticut Returned Peace Corps Volunteers. She and others work with the Darien Book Aid’s Peggy Minnis to send shipments to Peace Corps volunteers worldwide.

They also send free books elsewhere in the developing world, and to libraries, prisons, hospitals and Native American and Appalachian groups in the United States.

Until now, Liceul Teoretic Andrei Vartic in Ialoveni has had only a single small shelf of English books, few of them appealing, as you can see in the photo. Many of the students study English, so it’s no wonder the school librarian, Doamna Zinaida, was excited as she helped Champa open the box and pull out the treasures inside.

I’m so impressed by this organization. They’re doing something simple and meaningful, year after year, to improve people’s lives and make friends for our country.

Darien Book Aid depends on donations to help cover their shipping costs so, if you’re moved by the photos you see here, I encourage you to support them. That’s what we plan to do after we return home.

It’s Homecoming Weekend in Moldova. On Saturday, schools across the country welcomed alumni at their annual “Întâlnirea cu absolvenții” celebrations. Here in Ialoveni, Champa and I attended the festivities at her school, Liceul Teoretic ”Andrei Vartic.” Just like back home, there was a special welcome for alumni from graduation years divisible by five. There was singing, dancing, drama, speeches, flowers and hugs. Here are some photos and a video clip.

Every school in the Republic of Moldova celebrates its opening on September 1 with a colorful ceremony called Primal Sunet De Clopoțel, or First Bell. Local leaders and school officials give speeches of encouragement, students perform songs and dances and, finally, bells are rung as everyone cheers. This brief video shows highlights from the school in Ialoveni where Champa has begun teaching.