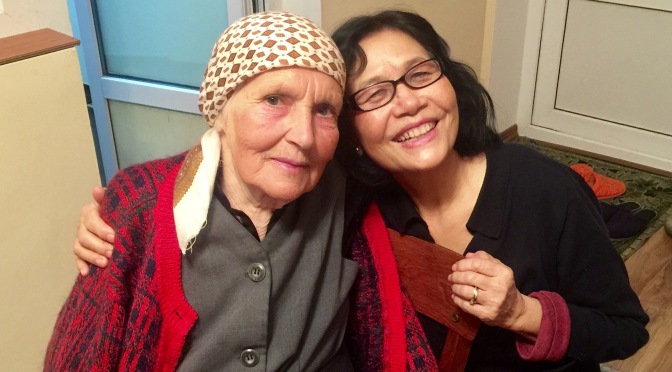 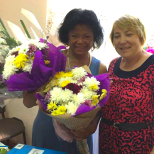 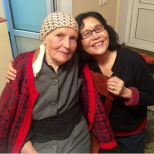 Has someone ever inspired you? Inspirational people exist not only in America but here in Moldova, too. A few weeks ago, Peace Corps launched a social media campaign on Facebook to honor some of them as Super Moldovans.

Celia Joyce, a Peace Corps volunteer from Ohio, selected Ruslan Bistrița, a science teacher from her school with whom she’s posing in the top-left photo. Celia said all of the students and teachers “admire his dedication, kindness and willingness to help. I feel the same way and am lucky to work with him.”

In the middle photo on top is Donna Barnes, formerly a professor at Howard University, who called her school director, Eudochia Babalici, a Super Moldovan for working “so long, with so little. She is a true inspiration to me.”

Champa is posing with our host family grandmother, or “bunica.” She wrote: “Nadejda Ciornea is my ‘Super Moldovan.’ She inspires me with her hard work and cheerful spirit. She is 86 years old and travels on public transportation every day to Chișinău, where she sells goods in the outdoor market, even during the winter. It is amazing how much energy she has. ‘Bunica’ is a caring person who makes me feel like a member of her own family. I am so lucky to know her.”

As you can see in the example from Haley Bader, volunteers are posting these salutes in both Romanian and English, with Peace Corps staff providing some translation help. Then the volunteers share the posts within their communities. Facebook is popular in Moldova, so local people see the nice things being said about their neighbors. 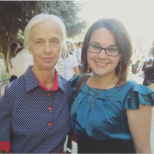 The response has been gratifying. Donna wrote: “When I showed the Super Moldovan page to my director with a picture of the two of us, her face lit up as though I had given her a pot of gold. I swear I made her day. She began sharing it with friends and family. She recently lost her husband and this is the first time in weeks I have seen her grin from ear to ear.”

Chris Flowers, in the maroon shirt above, got a similar reaction from his Super Moldovan, Ana Mirza, one of the leaders of Diamond Challenge in Moldova. Chris said Ana’s “face absolutely lit up. We often tell each other how much we appreciate the work we both do on the project but this gesture seemed very important to her and I’m very happy to have acknowledged her publicly.”

In the middle photo above is Peace Corps volunteer Alex Bostian, with his host mom, Valentina Efticov. On the right is Katrina Broughman with Nadejda Stoica, an English teacher and community leader. 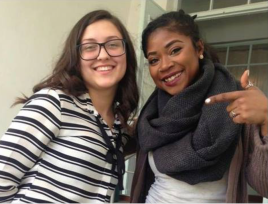 One of the first posters was Michelle McNeary from California. She’s honoring Rodica Novak, in the striped shirt, a senior in her high school whose “enthusiasm never ceases to amaze me.”

The Super Moldovans project began after our Peace Corps country director, Tracey Hébert-Seck, challenged Liuba Chitaev and me to think of a way to attract more

attention not only for volunteers but also for the great work being done by some of our Moldovan partners. Liuba manages communications for Peace Corps Moldova and, at Tracey’s request, I recently began working with her and others on communications projects, drawing on my own background in the field.

That’s Liuba at her desk in the photo. She helped to initiate the Super Moldovans campaign and has been doing a great job of managing it. She’s also planning some other new ways for Peace Corps Moldova to reach out to  various audiences.

It’s been a lot of fun to work with Liuba, who is full of energy and good ideas. She’s Moldovan, of course. Come to think of it, she’s pretty super, too.

One thought on “Super Moldovans”