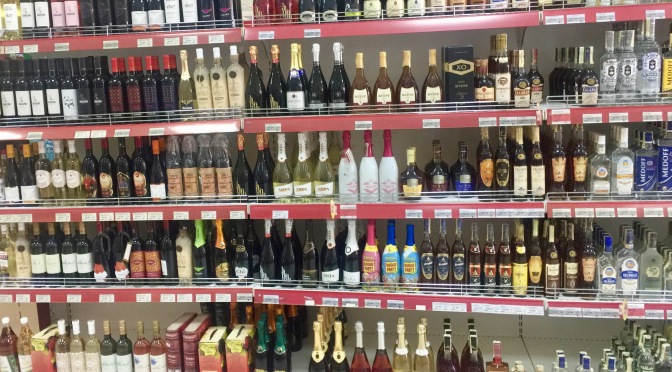 What’s a good time for a drink?

Here in Moldova, it’s not only at at parties with family and friends. Alcohol is also prominent at some business functions, as I was reminded on Friday when I joined my colleagues at an event to honor local farmers, winemakers and food manufacturers — our district’s most important industries.

National officials joined our district’s president in handing out awards at the gleaming local conference center. Music played. A woman recited a poem, Everyone applauded. Then they all moved to a room where tables were overflowing with traditional foods and glasses of local wine and other alcoholic beverages.

I joined my friends at a table where they brought not only filled glasses but also bottles of cognac and plum wine. The toasts began: “Noroc!” (Good luck.)  “La mulți ani!” (Long life.) Sănătate! (Good health.) “Succes!” (You can guess that one.)

Others at the event were toasting each other, too. A DJ played old American songs such as “Feelings” and “I Just Called to Say I Loved You,” mixed with “Besame Mucho,” Moldovan tunes and a sort of East European Muzak.

Mind you, this was all happening a day after Champa and I hosted a large Thanksgiving party, which featured homemade wine along with the turkey. I did my best to drink moderately and resist most of the invitations to join more rounds. 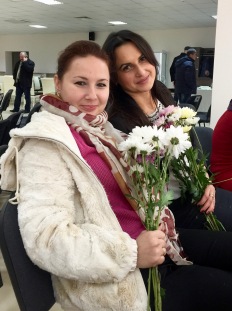 As the party wound down, one friend took over the sound system to replace the outdated music with Ne Bucuram In Ciuda Lor, a song by the popular Moldovan band Carla’s Dreams (see the video below). People took home flowers and leftovers, just as they might at an American party. I got a ride back to our office with a farmer who gave me a bag of delicious dried plums from his trunk. 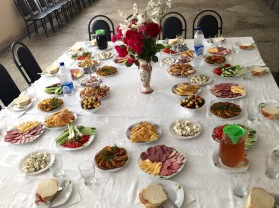 Alcohol is enjoyed not only in our city but across Moldova. During our Peace Corps training, my group visited a village where the mayor and her staff welcomed us with a fabulous masa, or feast, which you see here. It included carafes of local wine along with bottles of mineral water.

Wine is offered routinely at meals and in abundance at weddings or birthday parties. Champa and I have enjoyed it regularly while managing to keep it under control. So do most of my Moldovan friends.

That’s not always the case here in Moldova.  According to a 2014 report from the World Health Organization, Moldovans drink nearly three times the global average of 6.1 litres per person per year, a per capita total second only to Belarus worldwide.

As I’ve described previously, you can buy a bottle of delicious wine for two dollars in the local market or refill a bottle for less than a dollar — assuming your host family doesn’t have its own wine, which it probably does.

Throughout our training, the Peace Corps medical and security officers urged everyone to exercise good judgment with alcohol. We’ve tried to take their advice to heart (and to mouth). After all, when you’re in wine country — Napa Valley, Bordeaux or Moldova — the temptations are everywhere.