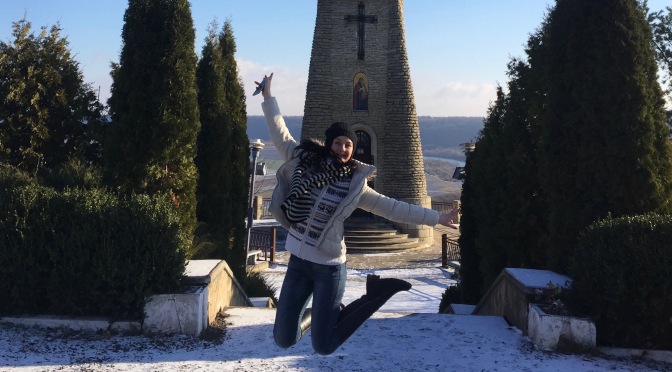 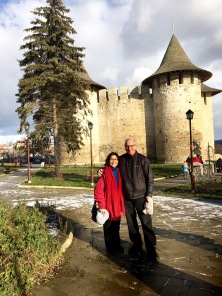 It’s in Soroca, in northern Moldova, just across the Nistru River from Ukraine. One of the country’s most famous sights, it was built in the 1540s to replace a wooden fortress established by the great leader Ştefan cel Mare.

Champa and I visited it on Sunday with our host family, who arranged a road trip to Soroca that included not one but two picnics en route.

Here we are in the family van with our host mother, Nina, who is in the white coat with her friend Tamara. Nina’s husband, Mihail, is driving.  We stopped just before Soroca to eat our first meal, which Nina set up in the van because it was too cold to dine outside.

Moldova is so small that we were able to drive from our home in Ialoveni, near the capital city Chisinau, to Soroca in well under three hours, not including stops. 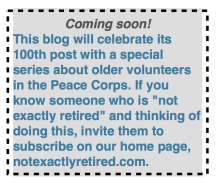 More than 35,000 people live in Soroca, making it one of Moldova’s larger cities and an important industrial and administrative center. It once had a large Jewish population, now almost entirely gone, and still has a sizable Roma population. Many Roma people live in the neighborhood known as Gypsy Hill, where majestic homes mimic St Peter’s Basilica at the Vatican, Moscow’s Bolshoi Theatre, even the U.S. Capitol. Like many visitors, we drove through the neighborhood to see for ourselves. (I can report there are no signs yet of a Trump Tower.) 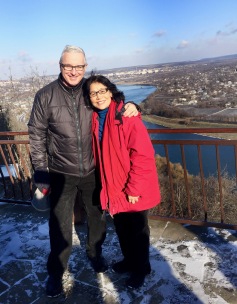 On the outskirts of Soroca we climbed 662 steps to Lumânarea Recunoştinţei, or Candle of Gratitude Monument. Opened in 2004, it’s a 97-foot tall tower honoring heroes who have preserved Moldova’s language and culture. That’s our host sister, Alisa, jumping in front of the monument and the two of us posing with the Nistru River behind us, Moldova on the left and Ukraine on the right. 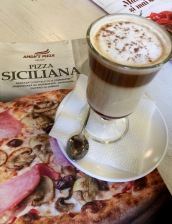 After visiting the monument, the fortress and other sites, we stopped for lattes and tea at the local Andy’s Pizza, a popular restaurant chain in Moldova. There we met several Peace Corps friends posted in the area, including Annelise, a health educator from Minnesota pictured here. Then we drove back to Ialoveni, stopping along the way for a second picnic, this one featuring turkey and rabbit, cheese, stuffed cabbage, cake and small cups of homemade wine.

We are so lucky to live with the Bordei family, who treated us to this unforgettable excursion. We saw one of the most beautiful places in Moldova and many interesting sights along the way. Even if we’d had only one picnic, it was a great day.

3 thoughts on “Trip to Soroca”