Models strutted, judges scribbled and photographers clicked away on Friday afternoon as Champa and I attended a Moldovan fashion show to cheer for an aspiring designer we know. Ludmila Cotelea-Condrea’s latest collection featured painted blouses and leather skirts, as shown here:

Her husband, Igor, with whom I work at the Consiliul Raional in Ialoveni, watched anxiously from the end of the runway as each model walked before the judges on either side. 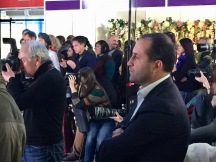 (That’s him in the photo.) Beside him was another friend, filming the event. Ludmila remained backstage until her collection, “Autumn Dream,” was finished, then appeared with one of the models to receive a bouquet of flowers and walk the runway to applause.

She was among a series of young designers showing their work at a 4-day Fashion Expo at MoldExpo, Chisinau’s convention center. Just beyond the runway were booths where local companies displayed their dresses, lingerie, handbags and other wares. There were also booths offering sewing machines, design software and other products for the industry, as well as models handing out advertisements.

According to one recent estimate, more than 25,000 people in Moldova are employed in the production of textiles, apparel, footwear and leather goods. Many of them are doing traditional work in villages, but more than 30 Moldovan companies now export to international markets. As I observed previously, small factories are springing up across the country, including one near Champa’s school. USAID and others have been supporting these efforts, as have several Peace Corps volunteers. 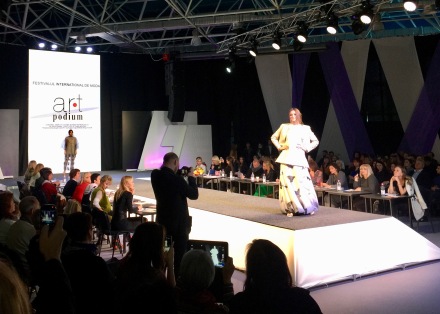 Champa and I never expected to attend our first fashion show when we signed up for the Peace Corps. It’s not exactly what we anticipated when we became “not exactly retired.” But we enjoyed ourselves thoroughly, admiring anew how local traditions intersect with modern aspirations here.

Ludmila was among the winners of the competition. If anyone reading this post has a connection to Anna Wintour, feel free to tell her that Ludmila speaks English and will be happy to take Anna’s call.