Have you ever heard of Falgunanda? His name is all but unknown to Westerners, even those who have visited Nepal. For that matter, many Nepalis have never heard of him, either. But if you are a member of one of the traditional Kirati ethnic groups of eastern Nepal — the Limbus, Rais and others — there’s a good chance you worship in front of his photo.

Champa is a Limbu, from the Dewan clan, so we’ve known for several years of the growing interest among Kiratis in this religious leader, born in 1885, who revived traditional Kirati cultural practices and challenged Nepal’s dominant Hinduism. Today, many Limbus and others have embraced Falgunanda, for both religious reasons and to assert their ethnic identity. It’s part of a movement among Nepal’s indigenous peoples to reclaim their history and demand a fairer share of the country’s resources. Our nephew, Shankar Limbu, with whom we are staying, has been a leader of this effort and has spoken about it at the United Nations and other venues.

On Friday, we hiked with Shankar to Kirat Manghim, a traditional Kirati temple in Sankha Devi Village on the outskirts of the Kathmandu Valley. 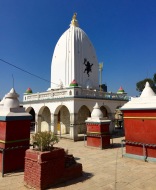 Along the way, we passed some of the countless Hindu temples, like the white one shown here, which are so omnipresent in Nepal. Buddhist temples are also common, and there are a growing number of mosques and churches as well. However, here in the valley there are few temples especially for Limbus such as Champa and Shankar.

Visiting this one was worth the largely uphill walk of nearly two hours in late-summer heat. The two main structures and prayer flags, shown above, were modest in size and decoration. But they provided a peaceful oasis, and the friendly caretakers were quick to offer chairs and lemongrass tea to help us recover from our ascent.

The main temple features bells and a drum on the outside and an altar and photo of Falgunanda on the inside.

We removed our hiking shoes before entering, made an offering and then received tikas on our foreheads as we exited. We also signed the guest registry, with my own signature, in English, now standing out among pages of Nepali signatures. (Yes, I know how to write my name in Nepali, but it was fun to highlight my status as one of the few Westerners to ever visit.)

Nepal’s indigenous people’s movement resembles similar campaigns in other parts of the world, from Indian peoples in Latin America to tribal groups in East Asia. One can also make interesting comparisons with our own country. It’s an important effort, long overdue, and we’re proud of Shankar and his colleagues for what they are doing. We think Falgunanda would be proud, too.

One thought on “Falgunanda’s Legacy”