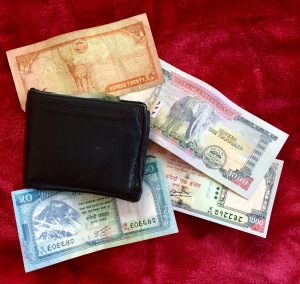 What’s in your wallet?

Mine is now filled with Nepalese rupees — thousands of rupees! Since the exchange rate is about 105 rupees for one U.S. dollar, however, that’s less impressive than it may sound. Back when I was a Peace Corps Volunteer in the late 1970s, the exchange rate was 12 rupees per dollar. Now, exchanging dollars can mean receiving a stack of money as thick as a brick.

The appearance of Nepal’s currency has changed, too. No longer does it feature the king’s portrait.  Since the royal family was removed from power, the money highlights Nepal’s yaks, rhinos, elephants, tigers and other animals, and, of course, Mount Everest. The coins have evolved as well.

My wallet also holds my bank debit card, which I used to obtain rupees at a local ATM in less than two minutes, a transaction that would have been unimaginable a few years ago. In addition, I have a Visa card that enables me to make foreign purchases without an extra fee, although credit cards remain less common here than back home.

My pants pockets contain other insights into Nepal. I carry tissues in case I need to wipe my nose or other parts of my body.

Similarly, I have a small medicine bottle that contains diarrhea medicine, if needed, along with Tylenol and vitamins.

A small flashlight is invaluable when electricity disappears, as it does regularly due to planned “load shedding” across Kathmandu’s neighborhoods.

And since air pollution here is even worse than when I visited five years ago and got a throat infection just from breathing, I carry a mask and asthma inhaler. Many Nepalis now wear masks as well. (Fortunately, I’ve barely needed the inhaler so far.)

Not surprisingly, I’ve brought jeans with enough space to accommodate everything I’m carrying. However, we’ve been eating so well that I may need to start spending those rupees faster to give myself more room.

One thought on “Pockets of Insight”