Champa and I have become fans of Europe’s rail system. We used trains recently to travel from Vienna to Budapest to Bratislava and we found them to be reliable and fun to ride. They were also easy to navigate even though we didn’t speak the local languages.

All of the ticket vendors spoke English. The automated ticket machines were available in English. So were the signs. The schedules were online. Our Visa cards were accepted everywhere. The seats were comfortable. The toilets were clean. There was even free wifi on some of the trains. 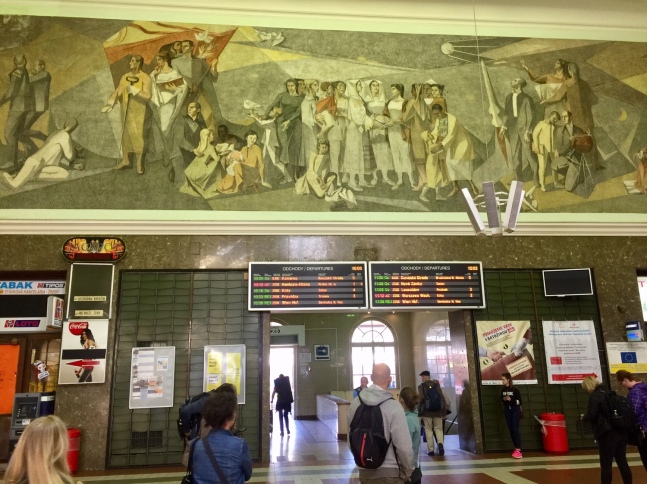 Vienna’s central train terminal, Wien Hauptbahnhof, and the Austrian trains we rode were the most modern. Like some of our own train stations back in the United States, the ones we used in Budapest, Keleti and Nyugati, felt much older, as did the main Hlavná station in Bratislava. However, we felt safe and comfortable in all of them and were impressed by the architecture and design, as with the mural in the Bratislava station shown above and the exterior of Budapest’s Keleti station shown below.

We’d heard good things about Europe’s trains but were uncertain since we’d never ridden them before. Now we plan to use them often if we visit Europe again after we finish our Peace Corps service in Moldova. We expect many of them to be even nicer than what we saw, especially in western Europe. All aboard. 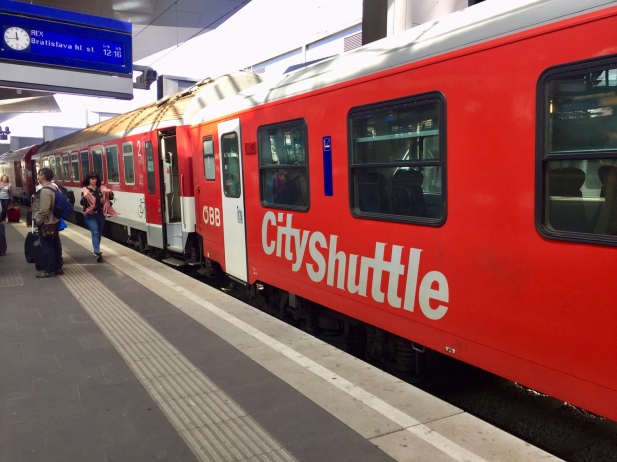 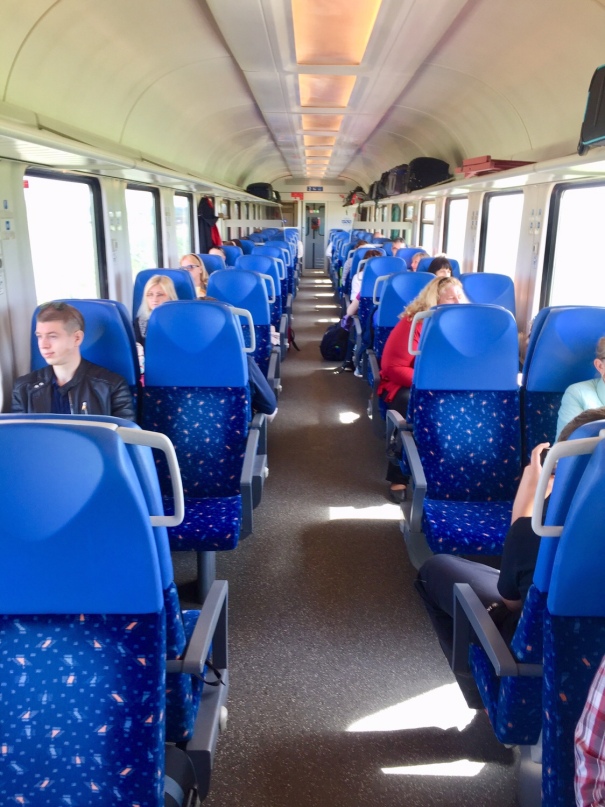 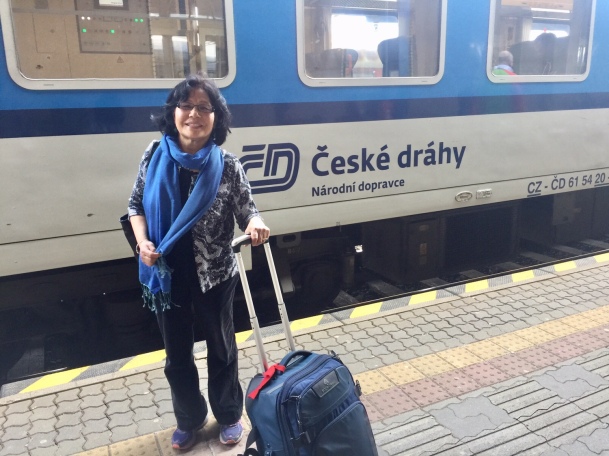 We saw lots of beautiful sights in Vienna, Budapest and Bratislava when we visited this past week. We also saw things that surprised or amused us, like the ten shown here: 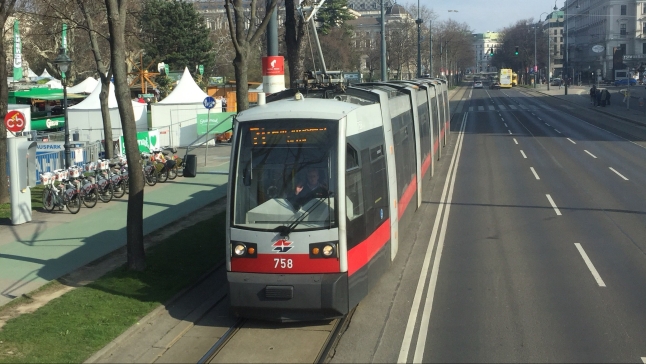 2. A Rabbit Outside the Opera House 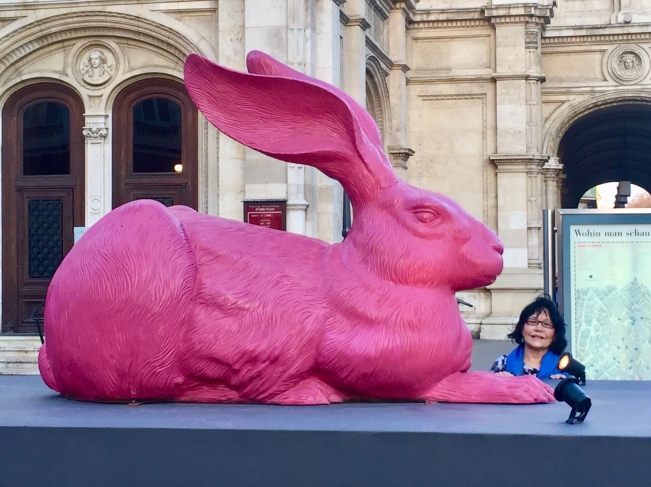 4. More Openness About the Holocaust 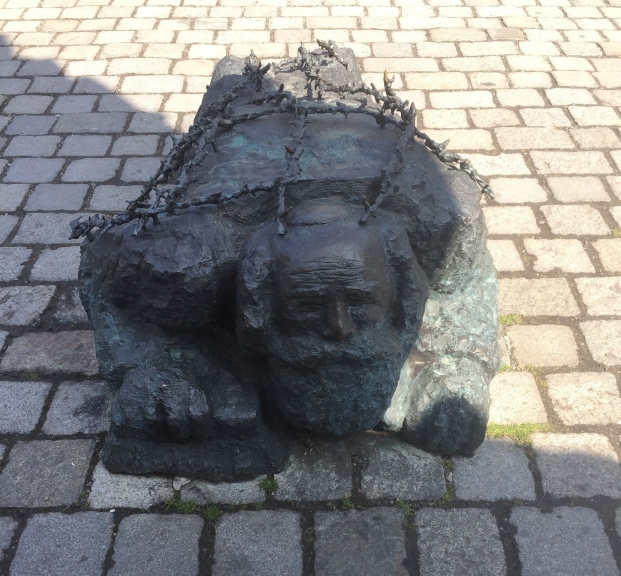 5. Reagan Beside a Soviet Memorial

9. A Street Memorial for a Slain Journalist

If you could visit just one place in a great city, where would you go? The Eiffel Tower or the Louvre in Paris? The Statue of Liberty or Central Park in New York? Tiananmen Square or the Forbidden City in Beijing?

I have answers for three cities we just visited along the Danube River: Vienna, Budapest and Bratislava. My picks aren’t necessarily the most famous spots in these cities but they’re the ones Champa and I will remember the most.

In Vienna, it was the opera house. Not inside the opera, where two tickets can cost more than our monthly Peace Corps budget, but the sidewalk outside. You can sit in chairs there and watch a performance live on a giant screen for free. We discovered this after we arrived in Vienna and saw the ballet Raymonda starting as we strolled by. We sat and enjoyed it for nearly an hour, returning the next day to catch part of Richard Wagner’s opera Die Walküre.

It was magical to sit outside on a beautiful evening and watch world-class performances in the Austrian city reknown for its music and culture.

In Budapest, we’ll most remember the Chain Bridge and adjacent funicular, which provide stunning views of a picturesque city. We’d already taken a boat ride down the Danube, sailing under the bridge and past the Parliament building and other sites. As in Vienna, we’d also toured the city with Big Bus.

However, nothing topped the view from the historic bridge that spans the river between Buda and Pest, the western and eastern sides of Hungary’s capital. Well, nothing except the historic cable car that climbs to an even better view from Buda Castle.

Our biggest Bratislava memory will be St. Martin’s Cathedral, and not only because it’s a landmark of the Slovakian capital. For us, it was also the view in the window of the Airbnb we rented across the square. We could admire the three-nave Gothic church while sipping our morning coffee and then walk a few steps to tour the interior. 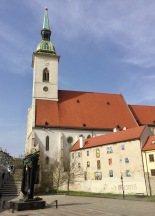 A sidewalk, a bridge and a cathedral weren’t the only places we enjoyed during our eight-day trip, the last vacation of our Peace Corps service. We saw lots of other things, too. Some were surprising, as I’ll explain in my next post. For now, you can see for yourself that many of them were amazing. 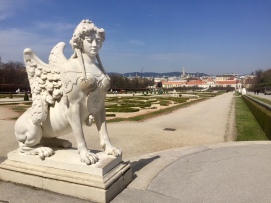 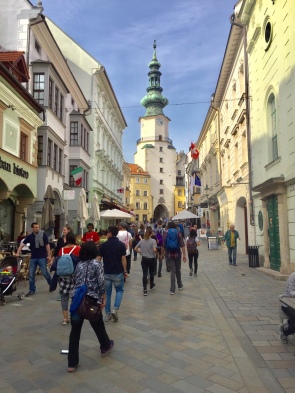 Mmmmasala dosa. So good.
Hanging out with my sister (and her husband, and George Washington and his troops).
After a very long pandemic wait ... reunited at last.
On the beach at Wilmington, NC.
We celebrated being vaccinated by going with friends to a restaurant for the first time in a year. I never thought I could enjoy a Tuesday night dinner so much. (Yes, we wore masks when not at the table!)
A welcome break from our pandemic isolation: overnight guests, with whom we enjoyed dinner and this breakfast I made. (Yes, we were seated much further apart than usual).