Moldovan national television just reconnected us to the city where we served in the Peace Corps.

On Thursday, it broadcast a story about North Carolinians who served in the Peace Corps, the latest in a series by TeleFilm Chişinǎu about the state’s partnership with Moldova.

We were deeply moved when we saw our former host family, work partners and others on the screen, showing off the projects we pursued together. Most emotional was seeing our beloved Bunica, or Moldovan grandmother, talking to us from her bed.

Even if you don’t speak a word of Romanian, you should have no trouble following along. We think the producers did a great job and hope you enjoy the story, too. “Mulțumim frumos!” to everyone who made it happen.

Ialoveni’s library has something new for local families: “Bebeteca,” a colorful children’s room where kids can play while adults enjoy educational discussions with guest speakers.

On Sunday, Jan. 28, Rusalina Russu will speak at 1 p.m. at Bebeteca about how she grew up in Ialoveni and became one of Moldova’s best-known television personalities, hosting a show about families. The program is free and the public is invited to attend. [ADDED: Here’s a short post about her talk along with several fun photos of the moms and kids.]

Last week, local doctor Diana Slivinschi, above, discussed children’s infectious diseases. Future speakers are scheduled to discuss topics ranging from dental care for children to planning trips with kids or how Ialoveni provides support to vulnerable families. At some programs, librarians will read stories aloud with the children. The library’s Facebook page will provide details.

Parents and grandparents can enjoy the discussions while their kids play with toys and books the library has bought along with children’s furniture and a wall-mounted TV.

Students from Ialoveni’s School of Art, upstairs from the library, are painting the room with an original mural featuring characters from national children’s stories.

“We are excited to offer this new programs for families in Ialoveni,” Valentina Plamadeala, director of BPO “Petre Ştefănucă” said. 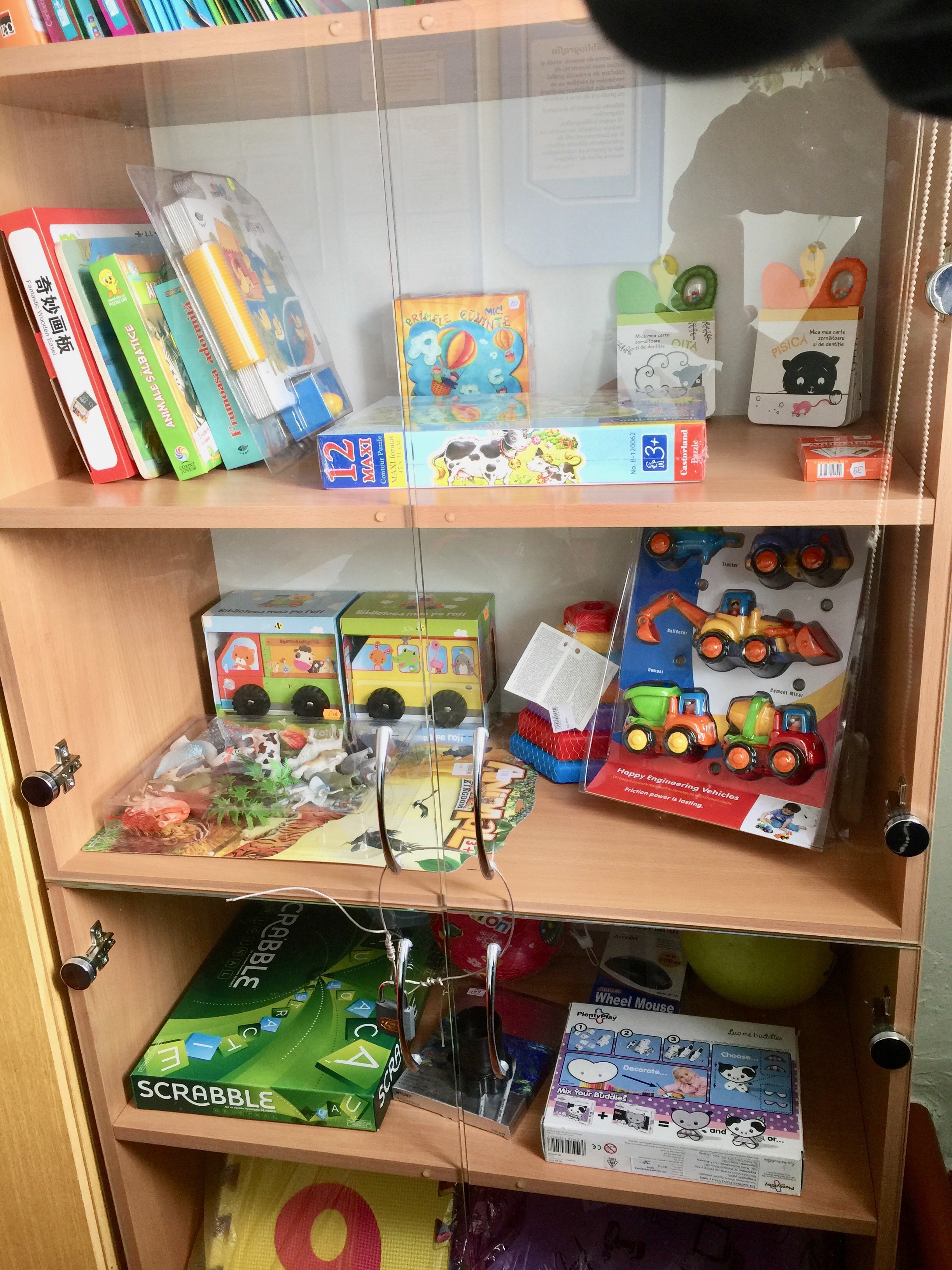 “We want to offer mothers and families the chance to meet, have fun and learn something new. We also hope they will explore the library while they’re here and borrow some books or sign up for our free programs, from learning English to making simple animated movies.”

Plamadeala said story-telling programs at libraries are popular in many countries, including Romania, but a new idea in Moldova. She hopes the Ialoveni program may inspire other libraries in Moldova to launch similar efforts.

Responding to information gathered in a community survey, BPO “Petre Ştefănucă” created the new space with the support of a U.S. Peace Corps grant and a small project Plamadeala implemented through the “Together for the Community” program of the Association of Librarians in the Republic of Moldova and the National Library of Moldova in partnership with the Novateca National Program.

Librarian Lidia Rusu and Peace Corps Volunteer David Jarmul developed the project, purchased the materials and worked with the rest of the library staff to create the room and organize the programs.

(A Romanian version of this article was posted by the library, which used the infographic below to describe its survey results showing wide community support for the project idea .) 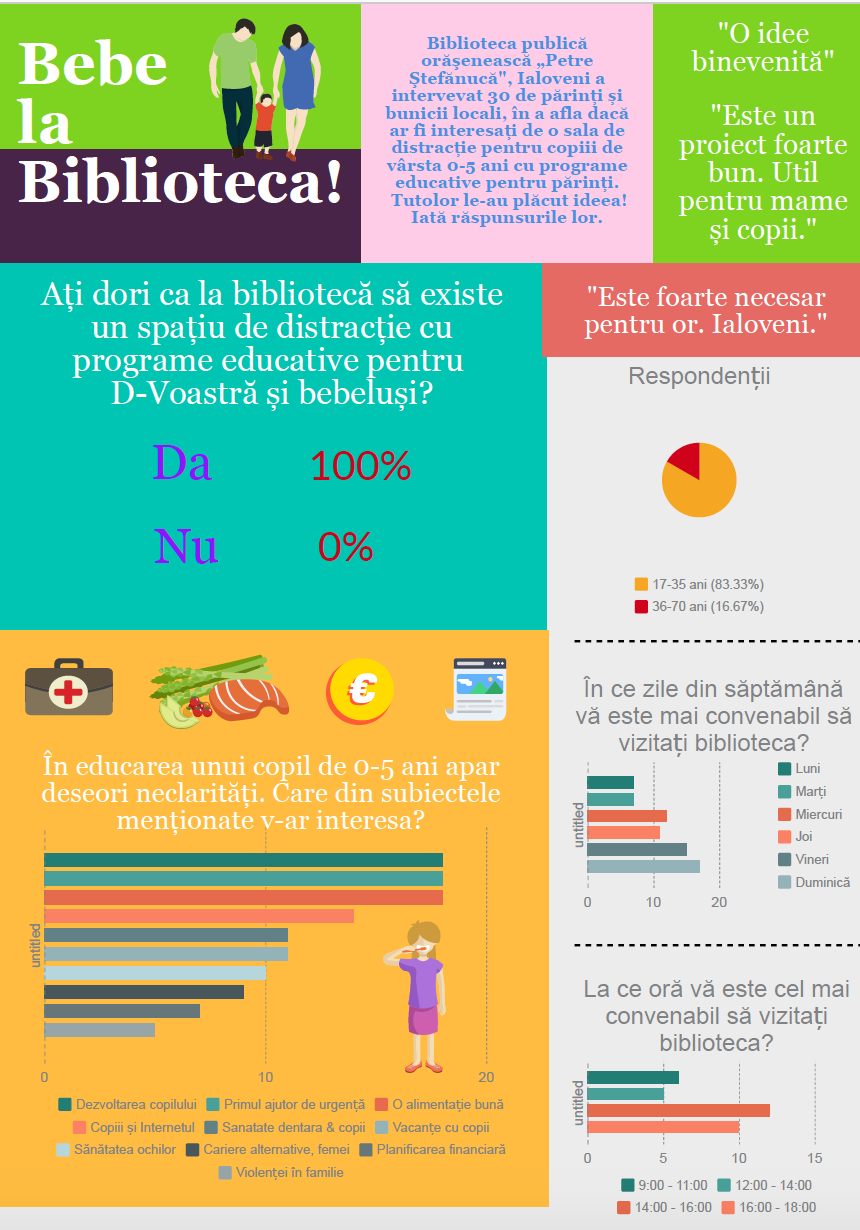 Raise your hand if you’ve done any of these things at your local library:

Oh, and you needed to do all this with a robot you programmed. (You can raise your hand on your own.)

On Wednesday, students in our robotics program at the Ialoveni library began their newest challenge: a “Hydro Dynamics” competition in which their robots will carry out as many of these and other tasks as possible within two and a half minutes.

They are joining students aged 9 to 16 from 80 countries in this event organized by First Lego League, an international organization that challenges kids to think like scientists and engineers. This year’s competition focuses on water; previous themes have included animals, food, trash and climate.

Our team will be programming robots to operate precisely on a colorful mat filled with Lego models of pipes, wells, fountains, gardens, a filtration system and other structures involving water. In one of the 18 possible missions, their robot will need to turn the handle of a faucet, releasing plastic models of water. In another, it must pull a lever that releases rain from a cloud. In others, it must place a water well near a garden, open a valve or drop water into a pot to make a flower rise.

This video shows what they’ll be doing:

Our students will also need to give a presentation in which they share an original idea for solving a problem involving water. Their overall score will assess their research, presentation and teamwork skills as well as their programming prowess. 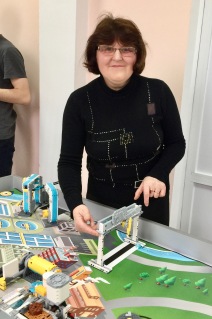 Ialoveni’s library, Biblioteca Publică Orășenească “Petre Ștefănucă,” is among several public libraries participating in the competition with support from Novateca, the NGO that’s been a driving force in modernizing public libraries across Moldova. (See my recent post describing Novateca’s remarkable impact in our area.)

On Monday and Tuesday, my colleague Lidia Rusu (shown above) and I participated in a training session for the new competition. Novateca organized the program, where we were reunited with many of the libraries we met at November’s SumoBot Challenge at Tekwill, which I showed in this video. The librarians have formed a Facebook group to stay in touch, share ideas and encourage each other as they compete against teams from schools and other groups.

Our students are now building the Lego structures for the competition and starting to think about their research project. After Christmas, they’ll need to decide which of the 18 missions to undertake, and then start modifying, programming and testing their robots.

Raise your hand and wish us luck.

If you’re an American, you see infographics everywhere these days— on television and websites, in magazines, even with academic articles or corporate sales reports.

Not if you live in Moldova. Many institutions in this small former Soviet state are still learning to share information with their stakeholders, much less to present it attractively to engage ther interest. 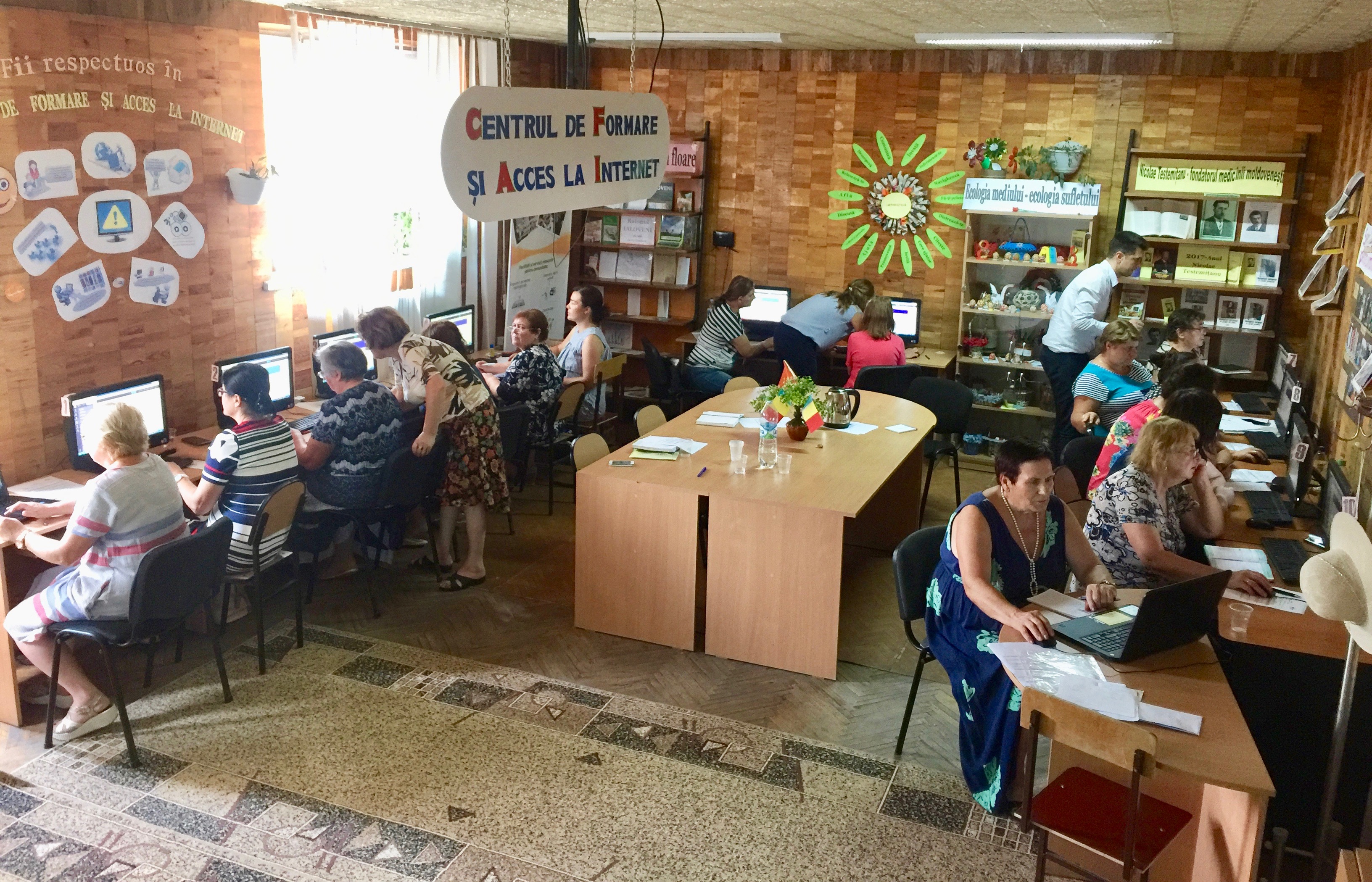 On Tuesday, the library in Ialoveni where I work as a Peace Corps volunteer held a workshop to train more than a dozen colleagues from area libraries in using infographics. Within a few hours, they all learned the basics of producing colorful posters or web posts to highlight their activities and community outreach. 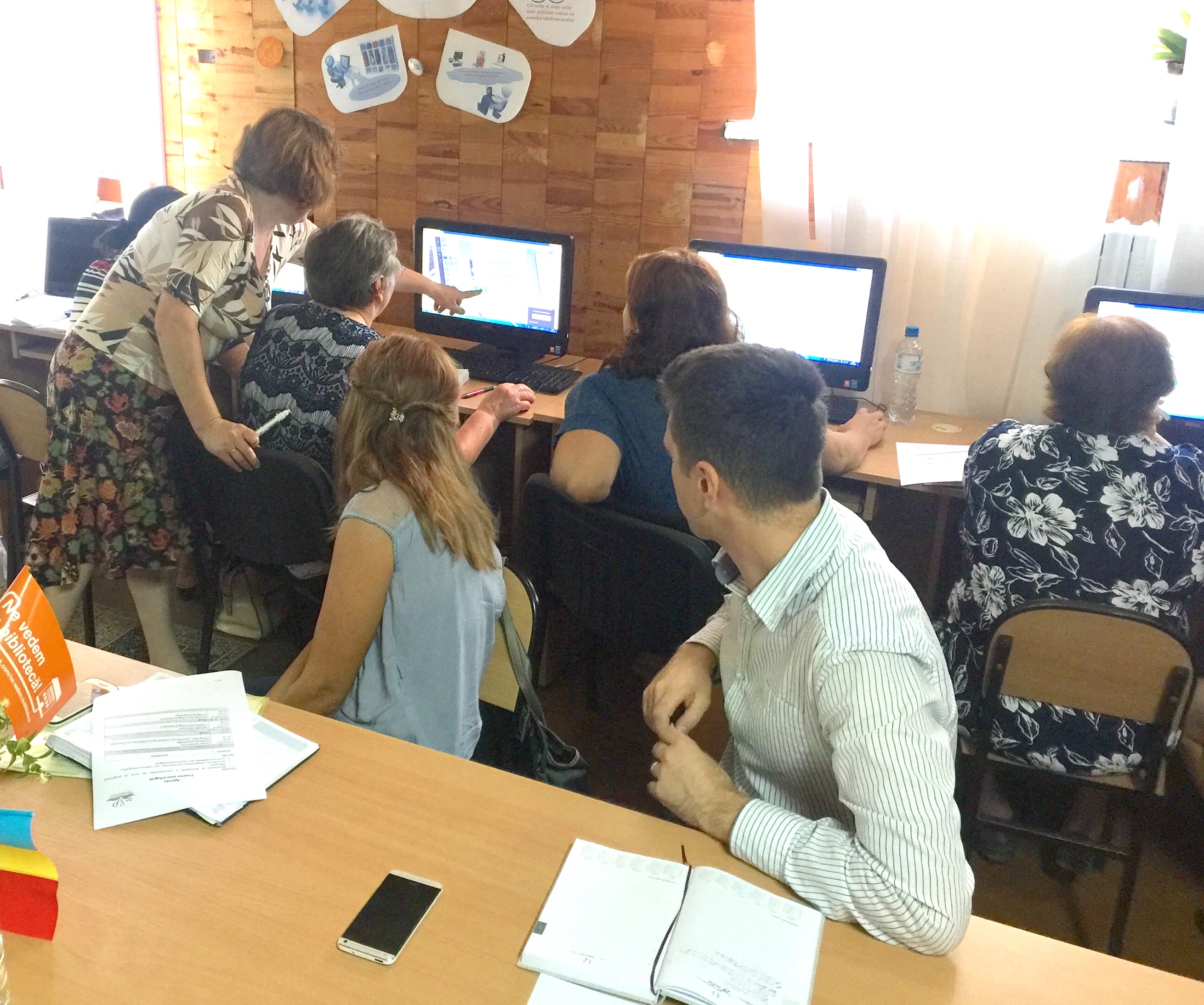 My library colleague, Lidia Rusu (shown left, pointing at the computer), led the training with enthusiasm and patience. By the end of the session almost all of the participants, even those with limited computer skills, were producing infographics more than nice enough to use immediately.

They used the free version of Piktochart, an online software platform popular in the United States and elsewhere. Lidia also recently began using PowToon, a platform for making simple animated videos. Even though she doesn’t speak English, she’s able to figure out software packages quickly, apply them effectively and explain them to others.

Ialoveni’s library, Biblioteca Publică Orășenească “Petre Ștefănucă,” hosted the workshop after being selected as one of the winners of a national infographic contest organized by Novateca, a nonprofit organization working to modernize libraries across Moldova. Ialoveni’s winning infographics, which I helped produce, are the two images on the left shown above.

Artiom Maister, an impact specialist with Novateca, shown below with Lidia, assisted her at the workshop, guiding the participants in how to modify templates, use icons, insert data and transfer their work to their websites, blogs or printed posters. 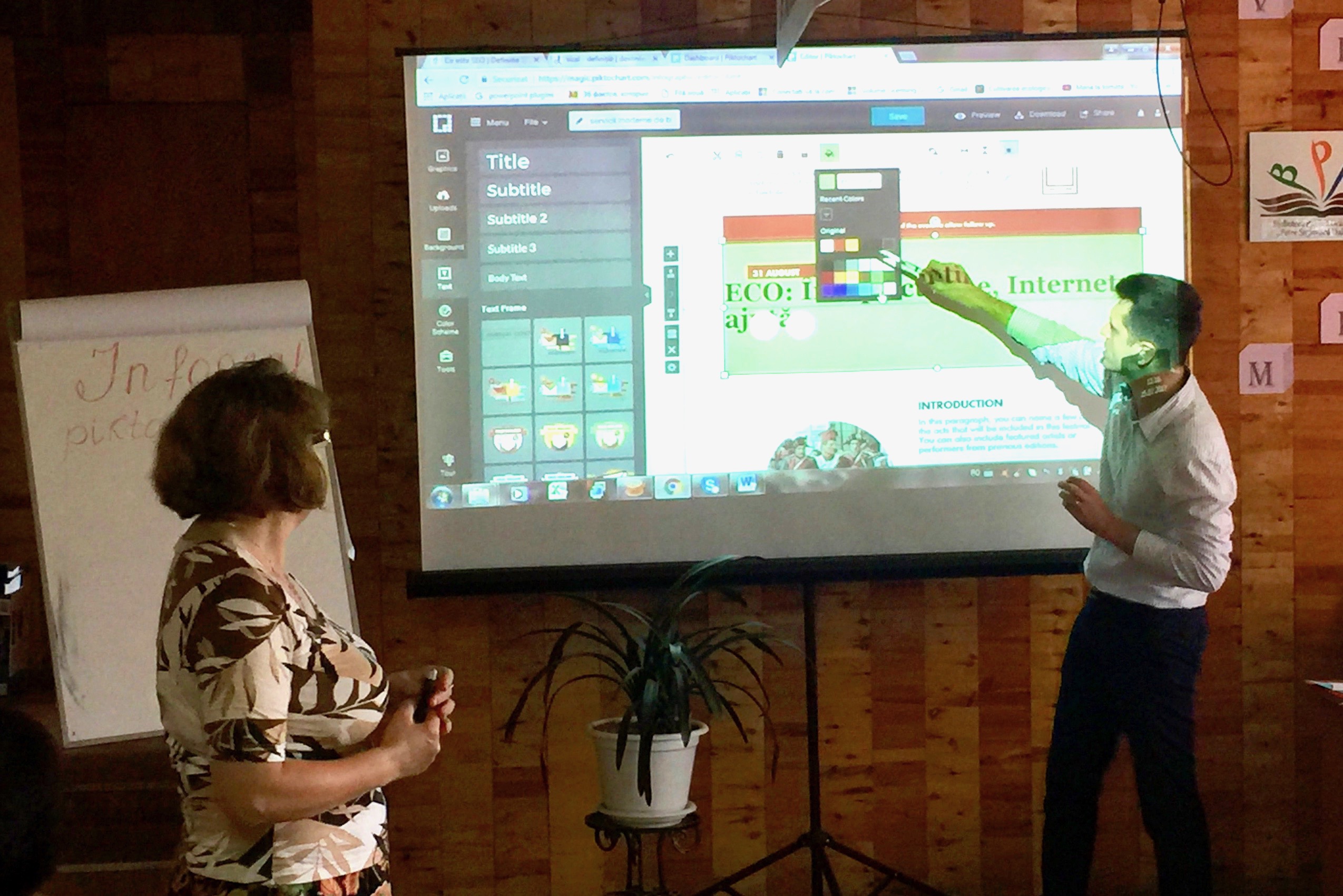 The session was just the latest way Novateca has been encouraging this country’s  libraries — still viewed by some as dusty repositories of old Russian books — to embrace a new role as modern information centers and community resources. Through its five-year program, Novateca has provided hundreds of libraries here with thousands of computers and Internet access. It’s trained librarians on everything from how to find new funding sources to organizing robotics clubs or hackathons. 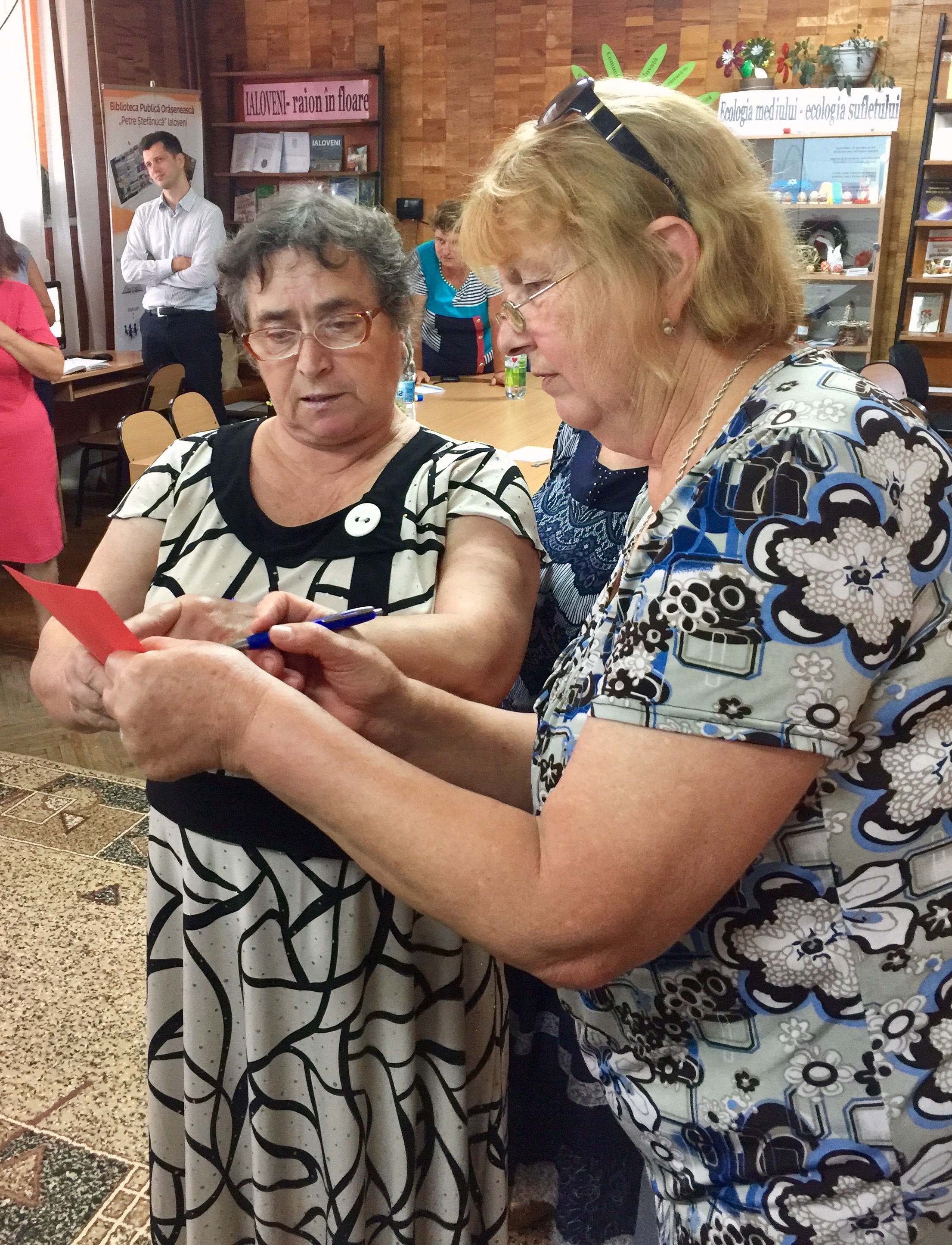 I’ve seen Novateca’s impact not only in Ialoveni but also in Bardar, where I lived during my Peace Corps training, and in other libraries. My best description is a word I don’t use lightly: transformative. As it approaches the end of its generous funding from the Bill and Melinda Gates Foundation, Novateca is now working to empower both local librarians and national institutions to carry on its mission. A representative from one of those institutions, Victoria Popa from the National Library, participated actively in Tuesday’s infographic session.

This kind of training is important not only to the libraries themselves, but also to the emergence of an open civil society in Moldova.  By learning to use infographics and other modern communications techniques, libraries and other public institutions become more able to explain to citizens what they are doing and how they can serve them. Infographics here have the potential to be so much more than pretty pictures.