Every picture tells a story. Can you guess what this one is telling you? 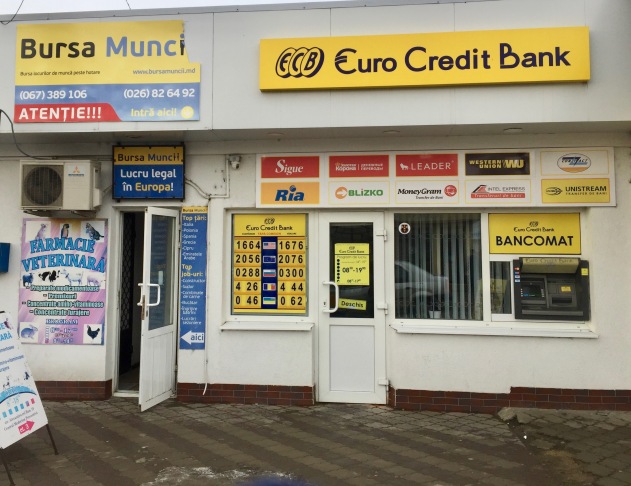 As you can see, it shows two shops, which are next to the traffic circle in Ialoveni, where Champa and I are serving as Peace Corps Volunteers. The yellow sign with the numbers shows

the latest exchange rates for the Moldovan leu relative to the U.S. dollar, the Euro, the Russian ruble and other currencies. The dollar has now slipped well below 17, continuing a slow descent I’ve discussed previously.

But something else is going on here, too. Look more carefully above the open door of the shop on the left. There’s a blue sign saying “Lucru legal în Europa!” In Romanian, that means “Work legally in Europe!” 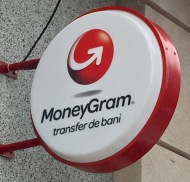 It’s no coincidence this sign is adjacent to one showing exchange rates. In fact, it’s key to understanding the deeper meaning of the photo. It’s like the MoneyGram sign across the street, which says “transfer de bani,” or money transfer, or the Western Union sign up the block.

Everywhere you look in Moldova, banks and shops offer to transfer and exchange money. They are so ubiquitous, in fact, that you barely notice them after awhile, just like the fast food joints that cover our landscape back home. 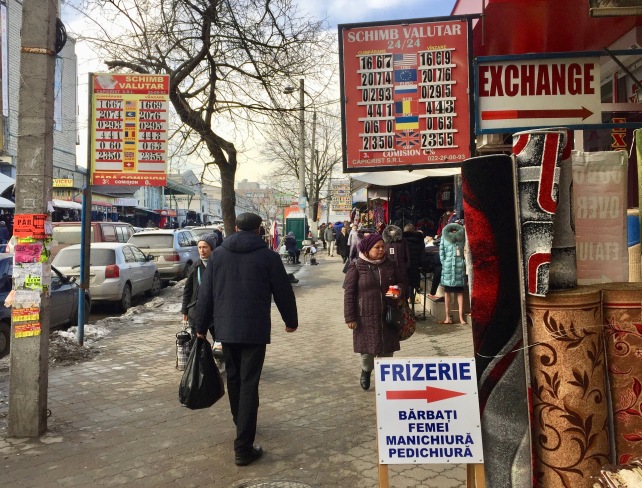 In the above photo in Moldova’s capital, Chișinău, there’s not only the shop with the red “Schimb Valutar” and “Exchange” signs but another one further up the block. Look carefully; it’s there. There are even more shops and signs as you get closer to places with lots of travelers, like the central bus station.

Moldova gets few foreign tourists, so the shops aren’t looking primarily to attract them. Nor are there many Moldovan tourists looking to buy Euros or dollars before heading on vacations in the other direction. 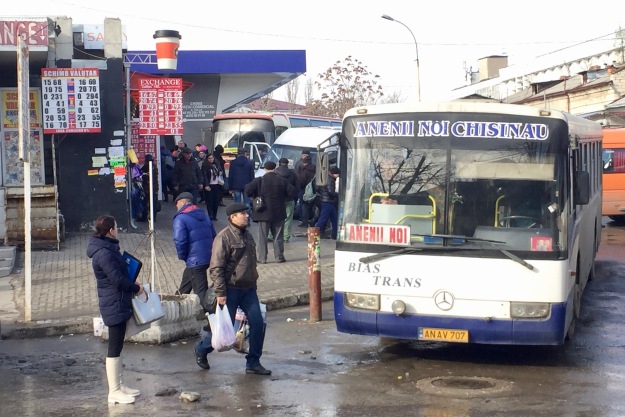 No, all of this is a reminder of how many Moldovans have left their homeland to work abroad — especially in Western Europe but also in Russia and other eastern countries, as well as in the United States, Israel and elsewhere. As I’ve described previously, many of them must leave behind spouses and children, a story we hear again and again when we talk with our Moldovan friends.

When these foreign workers come home to visit, they often bring much of their earnings with them, or they may send money home with a trusted friend. Many also rely on banks and money transfer companies, comparing the fees, exchange rates and service to get the best deal.

India and China, with their huge populations, are the world’s top “remittance-receiving” countries in overall dollars, followed by Philippines and Mexico. When calculated on a per capita basis or as a percentage of GDP, however, Moldova’s foreign workers are among the world’s leaders, as illustrated in the graph above, which is based on World Bank data. (I could not find a graphic with more recent data but there’s no doubt Moldova is still high on the list.)

Just like back home, much of this industry has moved online, for paying bills as well as for transferring and exchanging money. In fact, when I glanced last week at this yellow kiosk in the entrance to our local Market Victoria, I was startled to see bitcoin now listed as one of the options.

You can certainly find money-exchange shops in the United States, too, especially in places with lots of foreign-born workers. I must have walked obliviously past the Western Union sign at my Harris-Teeter supermarket in Durham dozens of times until I needed to send money to someone in China. Then I noticed it. Every picture tells a story when you’re finally ready to see it.