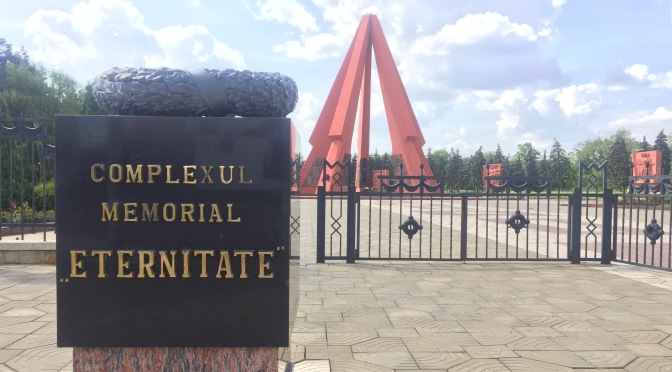 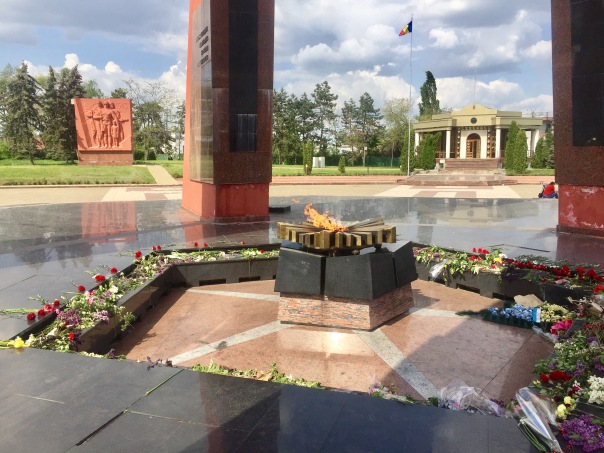 Memorial Day is on Monday back home. Champa and I got a head start earlier this month when we visited the big victory memorial here in Moldova.

Located in the heart of Chișinău, the memorial complex is built around a circle of five dramatic red pillars surrounding an eternal flame. 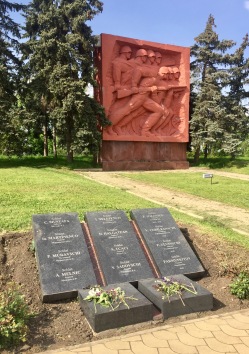 Nearby are sculpted murals depicting the bloody struggle to defeat Nazi Germany. Smaller monuments honor fallen heroes and show the names of Soviet soldiers who gave their lives to liberate Moldova in August 1944. Rows of white grave markers in the adjacent cemetery are reminiscent of Arlington Cemetery, albeit with Russian inscriptions.

We visited the park with two Peace Corps friends, Beth and Andrea, shortly before Moldova’s Victory Day on May 9. Soldiers were mowing the grass, pulling weeds and sprucing up. 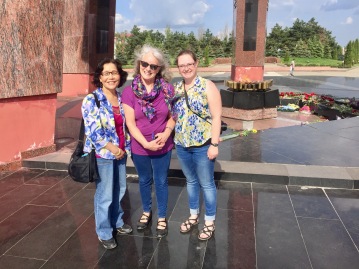 Moldova was part of the Soviet Union, which was America’s most important ally on the eastern European front of World War II. Yet we inevitably view our joint victory through the lens of the subsequent Cold War. For Moldovans, the legacy is even more complicated since the German occupation was followed by decades of Russian rule.

I found it fascinating how the Soviet gravestones lack any religious markings while those erected since Moldovan independence, just a few yards away, are adorned with crosses. One gravestone has an inscription saying (in Romanian), “Born speaking Romanian; died speaking Romanian,” a clear rejection of the Russian language. The cemetery also honors Moldovans who died shortly after independence in the war in Transnistria, the pro-Russian region that broke away and remains largely autonomous. 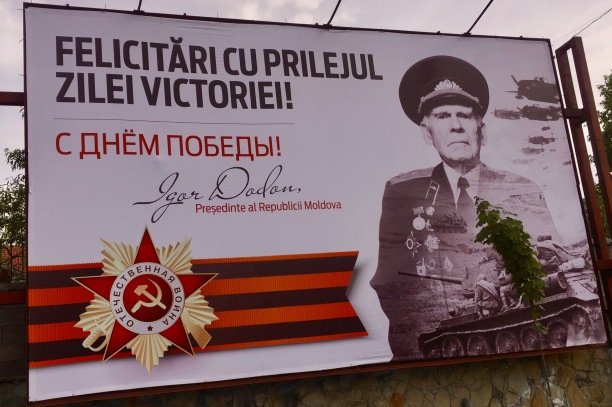 Yet many Moldovans have close personal ties to Russia, want closer relations with it and cherish its glorious triumph. Just outside the park we saw this billboard promoting Victory Day. It displays a Soviet hammer and sickle and the signature of Moldova’s current president, who sat beside Vladimir Putin at Moscow’s victory parade on May 9. 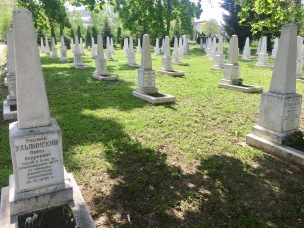 Many thousands of Moldovans marched or gathered in Chișinău the same day, as they did around the country, especially in Russian-speaking areas. In places where Romanian is commonly spoken, the emphasis tended to be more on European unity, especially with the West.

Even the date of Moldova’s Memorial Day is complicated. Germany’s unconditional surrender to the Allies occurred on May 7, 1945, which Americans remember as V-E Day (Victory in Europe Day). People in this part of Europe, however, commemorate a ceremony that took place late the following day in which Germany formally surrendered to the Soviet forces. Since it was already May 9 by then in Moscow, that became the official date for Russia and other Soviet states, including Moldova. 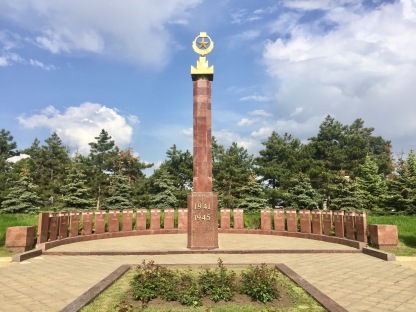 More than 70 years after the war ended, its impact on the history and psyche of this region remains profound. As I have written previously, almost every Moldovan village has a memorial, usually accompanied by the names of local men who died. In the village where I lived during training, the list exceeded 100 names, an astonishing toll. Many Moldovans also have painful memories of family members and friends who were deported by the Soviets after the war.

As a Peace Corps volunteer, I avoid politics. Yet our visit to the memorial park was a reminder that history is never far away in this small but complex country. Like the flame inside Chișinău’s monument, memories here smolder, flicker and burn. Every day is Memorial Day. 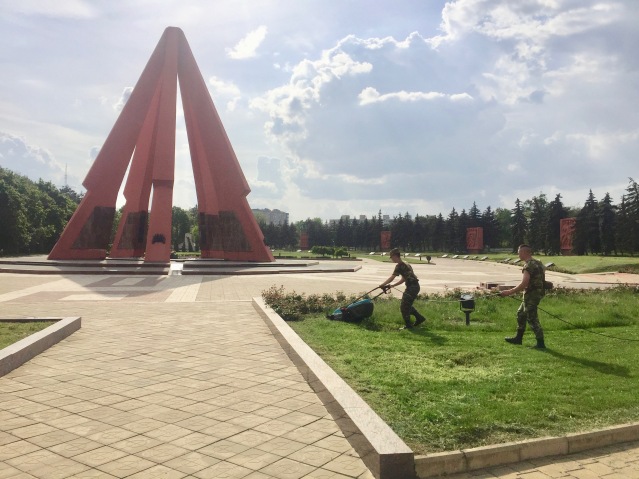