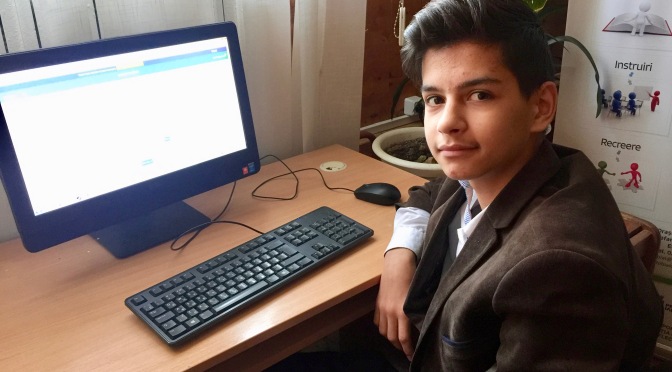 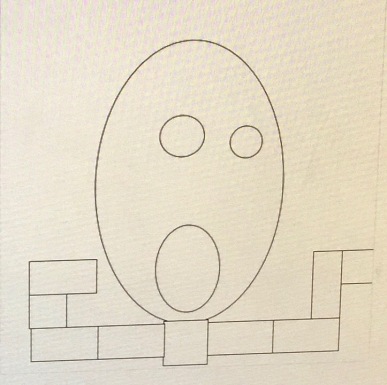 Does this drawing remind you of a certain nursery rhyme — you know, the one about an egg, a wall and a “great fall”? 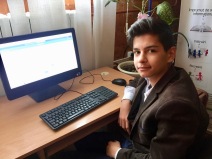 Humpty Dumpty immediately came to my mind on Wednesday afternoon when I looked at the drawing, which was created by Chris, a student in my weekly computer coding class.

“Humpty Dumpty!” I replied. “I can’t believe you figured out so quickly how to draw him.”

Chris, who you see here in the photo, had no idea who I was talking about, either in my halting Romanian or in English, so I searched on Google and showed him this video:

Several of his friends began watching, too. None of them had ever heard of Humpty Dumpty either, but they were impressed that Chris had unknowingly recreated a famous character. Here’s the code he wrote to do this:

As you can see from the green banner at the top, they were all doing a lesson on Khan Academy, the free website that offers excellent tutorials on everything from algebra to history. My students have been learning JavaScript, the popular programming language. The site guided them to write simple commands for ellipses and rectangles, which they then resized and moved around their screens to form snowmen and robots. Chris took it a step further and created Humpty. 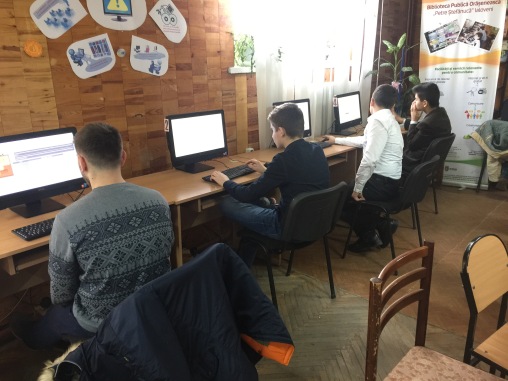 I began teaching computer coding at our local library a month ago, using the Hour of Code website to challenge local students to write simple commands for the computer game Minecraft. They enjoyed it so much that they moved on to similar modules based on Star Wars and Frozen. Then several of the boys said they wanted to learn JavaScript, so we began working our way through some of the lessons on Khan Academy and other sites. 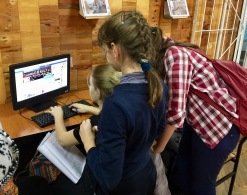 Note that I said “boys.” My biggest disappointment has been my inability to attract more girls to the class. I asked the librarians to help recruit girls, and they’ve reached out to a nearby school, but so far we haven’t had much luck, even when I offered to teach a separate class for girls. I asked the girls you see here to participate on Wednesday, but they were too busy checking out a dance site on Facebook. 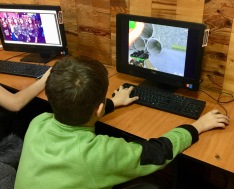 Not all of the boys are interested, either. The one you see here programmed the first snowman with us but then, when I was busy on the other side of the room, switched to a computer game featuring shooting and soldiers.  You can also see part of the computer next to him, where a girl is checking out a photo of other girls dressed up for a performance. Just outside the photo are computers where several other boys were also playing action games. I did convince one older boy to try Hour of Code, which he enjoyed, but after competing the module he switched to Facebook and YouTube instead of moving on to the next module.

Since I’m learning JavaScript along with the students, generally teaching myself each lesson one day in advance, it’s probably just as well that I don’t have a huge class. I’m barely keeping up with Chris and the other boys as it is. Now that we’ve all learned a bit about drawing, they want to try creating a simple computer game.