I’d be glued to social media and the latest news about the Orlando shootings and aftermath if I were back home right now. But I’m not. I’m halfway around the world, in Moldova, training to become a Peace Corps volunteer.

It’s strange to be so distant when something momentous happens back home. I’m still an American. I still feel outrage. So do my fellow trainees, who opened Thursday’s group meeting with a moment of silence in memory of the Orlando victims. “What happened was hateful; it was evil,” our Peace Corps director Tracey told us.

Nonetheless, even though I’m following the news and receiving my Facebook feeds, the events feel far away. They are far away, at least geographically.

My current day-to-day reality is this: I go to language class all morning. I have tech training in the afternoon. I talk with Champa on the phone. I eat and try to communicate with my host family. I cram vocabulary lists and verb conjugations whenever I can. Then I go to sleep. The photos show what we did on Wednesday.

I’ve found myself thinking back to when I was a Peace Corps volunteer in Nepal years ago. My news sources then were a shortwave radio and a weekly international edition of Newsweek. My village postmaster looked forward to the magazine as much as I did, since we’d flip through it together before I went home. One week the Newsweek cover showed bloated bodies strewn in the jungles of Guyana. It was the Jonestown massacre, where hundreds of American cult members drank poison and died. The postmaster looked at the photos and asked me to explain how this could happen. I didn’t know what to say.

Years later, I was in Bangladesh writing a magazine story about a local scientist working to combat diarrheal diseases. He and I spent our final day together — a beautiful September day — visiting with families in the slums of Dhaka, then I took him and a colleague out for a farewell dinner. When I returned to my hotel and turned on the television, the World Trade Center was in ruins. The next morning, I was one of the few Westerners in the Dhaka airport. Everyone was staring at television monitors, watching the footage from New York and Washington again and again. Once again, I felt very American and very far from home. 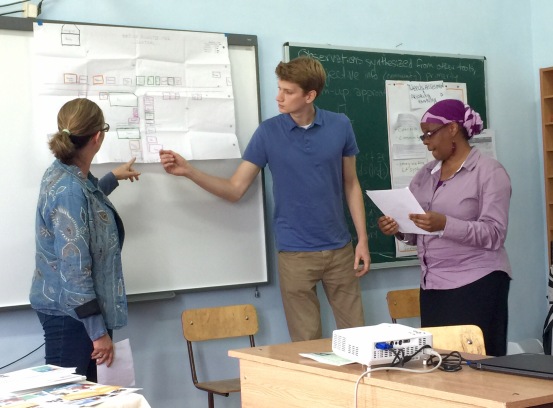 So I should have known what to expect emotionally when I heard the terrible news about Orlando, followed by the controversy over Donald Trump’s response and everything else that has happened in the past few days. But familiarity is not a vaccination. It’s still been strange to watch all of this from a distance, discussing it with the other trainees when we get a moment between language classes. Soon enough, we’re back to memorizing the Romanian words for fruits and vegetables, or how to conjugate the feminine plural form of an adjective.

That’s what I’ve been obsessing about during this momentous week, for better or worse. Tracey reminded all of us that “you are here to do good,” to promote “peace, friendship and understanding” — the very values challenged by what happened in Orlando. Even though we are far away, she said: “Know you are in the right place at the right time.”