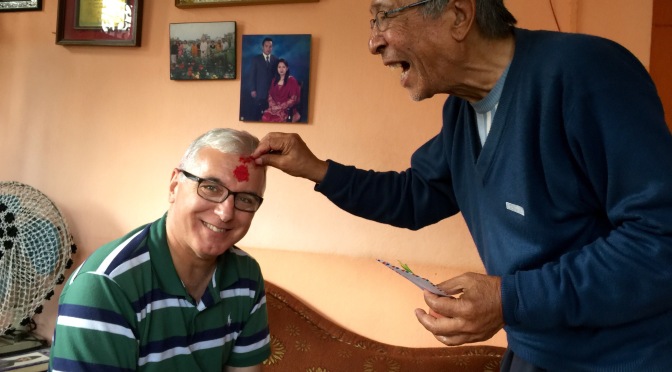 Not when it comes to getting tikas during Dashain, Nepal’s biggest holiday.

I received five from various friends and family members during the past few days, and was honored each time.

Tikas are a mixture of red powder, rice and yogurt, with a little sugar sometimes blended in. The person who bestows a tika is usually an older relative, to whom you are showing respect.

Here’s how it works: You sit at a table with your hands raised in front of you. The tika-giver uses his or her thumb and finger to apply a dab to your forehead, then places jamara — yellowish rice plant shoots — behind your ear or on your hair. While doing this, they chant blessings for your happiness and future.

Next, they give you a piece of fruit and an envelope containing a bit of lucky money. Three of the envelopes I received were adorned with swastikas, which are a traditional Hindu symbol of prosperity. People gave them to me with love and generosity, so I let pass what the symbolism might mean for a Westerner, especially one whose mother fled from Nazi Germany.

After you receive the tika, you bow towards the person and thank them for their blessing. You’re supposed to wear the tika for at least the rest of the day, if not longer. Later, you can wash it off easily in the sink.

This year I gave someone a Dashain tika for the first time, as you can see here. That’s Mamata, whose mother Usha, gave me a tika just a moment earlier. I watched Usha didi’s technique carefully but, even so, was relieved that I didn’t screw up and commit some religious faux pas.

During the first five days of the Dashain season, people travel from house to house, receiving tikas from grandparents, parents, uncles, aunts and others. Each visit is accompanied by delicious snacks before the tika and an even more delicious meal afterwards. This year, tika season ended with the full moon on Sunday. Next year’s season is now less than a year away. I’m already getting my thumb and finger ready. 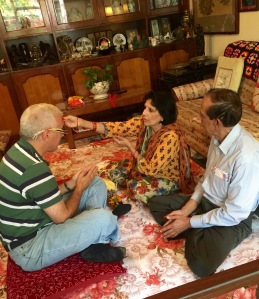