These faces of devotion are gathered along a stream to wash away curses, evil spirits and bad luck, to be replaced by prosperity, health and good luck.

Their maanghope ceremony, all but unknown in the West, took place Saturday morning along a stream in Samalbung, a small village in eastern Nepal. Families gathered to pray, light candles, beat drums and toss flower petals and grain into the water. 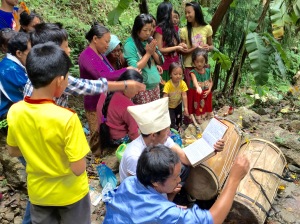 Jai Kumar, with the large white hat, led the ceremony. He is the local sikhsamba, or religious leader, for a growing number of Kirati people in this part of Nepal who have begun turning away from Hinduism and returning to animist traditions. They also have rejected animal sacrifices.  Instead, they follow the teachings of Falgunanda, whose temple in Kathmandu I described in a previous post.

Jai Kumar, a second cousin of ours, expects no payment for leading the ceremony, which calls on everyone to pray not only for themselves and their families, but for the entire community. He lives next door to the home of Champa’s older sister, Sumitra, who died earlier this year. A day earlier, he led another ceremony at the house to coincide with our arrival.

Champa and I came here from Ilam along a breathtakingly bumpy road to pay our respects at the graves of Sumitra and her husband, Naina, and to visit with our nieces, nephews and extended family. 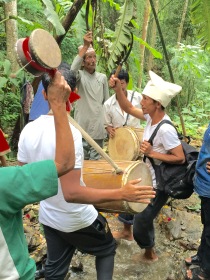 They and their neighbors are the people you see in the photos, gathering as they do every year during the harvest season for the maanghope ceremony. Another annual ceremony, ubhawli, occurs during planting season.

Few Westerners have ever observed the ceremony, which lasted about an hour. I felt honored, as a member of the family, to be invited to participate. The sights were even more colorful and dramatic than you see here. The drums, cymbals and chanting voices blended with the flowing water and chirping birds to compose a symphony of serenity that still lingers.

2 thoughts on “Prayers at the Stream”

Rafting along West Virginia’s New River with friends Karen and Bob.
Almost heaven, West Virginia.
Our favorite picnic of the year, even when it’s raining. 🇲🇩🇳🇵🇺🇸
Getting ready for Halloween.
North Carolina Peace Corps night with the Durham Bulls. A beautiful Saturday evening, snacks, fireworks … and the Bulls won!
They’re a little bigger now than they were as kids.