SInce Friday, we have been in Ilam, Champa’s home town in eastern Nepal. It’s where I was initially posted as a Peace Corps Volunteer, at the school where Champa was among the other teachers.

If you think Durham and some other American cities have changed a lot in the past few years, you should see what’s happened here. Ilam has grown from a sleepy district center into a bustling town with hotels, restaurants, cell phone stores, computer centers, bakeries, travel agencies and schools. There are two newspapers, a radio station and countless satellite television dishes offering everything from local soap operas to American movies.

Located just across the border from India’s Darjeeling, Ilam is Nepal’s tea-growing center. Its tea gardens have expanded greatly yet remain as picturesque as ever. You can now take a pleasant stroll through the main gardens to a new observation tower where for 100 rupees — just under one U.S. dollar — you get a great view of the surrounding area. Next door is a coffee shop offering hot beverages, spicy snacks and free wifi. 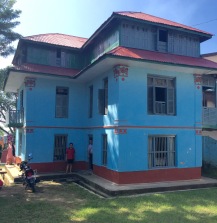 When I first moved to Ilam in 1977, I lived in two rooms on the first floor of the house shown here. A new family now owns the house but was very welcoming and let me peek inside.

My school headmaster moved me after a few months to the building shown here, where my room was on the second floor, behind the current sign.

It was miserable. Below me, another tenant cooked every night on an indoor wood stove. Smoke rose through the floorboards, filling my room and exacerbating the asthma I’d developed during training. I was unable to get the situation resolved and, before long, got pneumonia and was medically evacuated to the United States. I was able to return to Nepal only by agreeing to move to a new post near Kathmandu. Just seeing the building again brought back all of those bad memories. 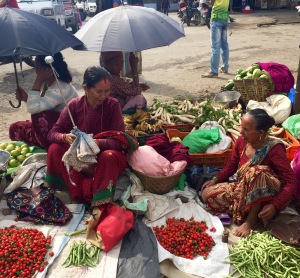 They were far outweighed, though, by Ilam’s many attractions. It’s a place that deserves far more attention from foreign visitors, who could spend a couple of pleasant days in a beautiful location and stay in modern hotels at bargain prices. The market days, on Thursdays and Sundays, are especially photogenic, but there are also great local hikes, temples and places to visit. 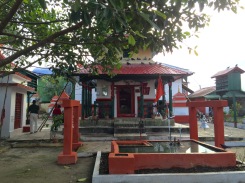 You can fly in less than an hour from Kathmandu to Bhadrapur, south of here, and then drive to Ilam in less than four hours in a modern vehicle on a good road, for less than it probably costs you to take a taxi from your local airport to your house.

Put it on your list, folks: Ilam, Nepal. As Champa notes in her shamelessly loyal new T-shirt, it’s a town you can quickly learn to love.

2 thoughts on “Big Changes in Ilam”