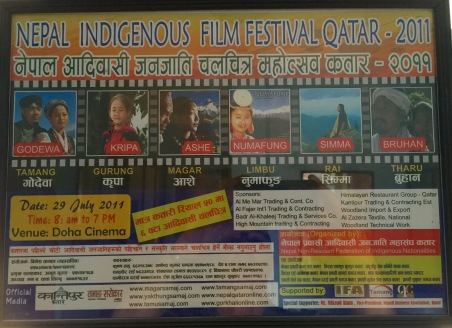 Are you planning to attend the documentary film festival this coming spring?

Durham’s Full Frame festival promises to be better than ever, but I’m referring to the 9th Nepal International Indigenous Film Festival, which opens in Kathmandu on March 3.

Last year, about 20,000 people gathered for four days along Kathmandu’s Exhibition Road to watch 48 films from 18 countries. Selected from more than 100 entries, the films ranged from full-length features to short documentaries, animations and music videos. All  depicted indigenous communities; 12 were produced here in Nepal. 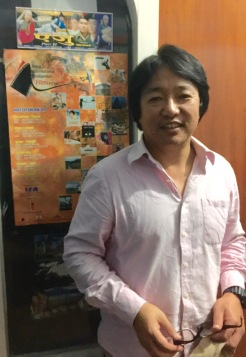 The festival is part of a larger effort to help filmmakers from overlooked ethnic groups share their stories. On Tuesday, I spent several hours with some of them.

Nabin Subba, the group’s leader, shown here, produced and directed Numafung, a feature film screened at several international festivals. A decade ago, he and several friends established the Indigenous Film Archive (IFA), a nonprofit organization that provides training, rents equipment and organizes events where young filmmakers can interact. They’ve reached out especially to women filmmakers, whose recent short films explore topics such as divorce in the Gurung community or how Limbu girls learn weaving.

You have to climb four flights of stairs to reach IFA’s small office, where you remove your shoes at the door and then hope the electricity stays on. Sanjog Laaphaa Magar, shown here at one of the editing computers, helps run the office and manage the annual festival. He also organizes a growing library of local and international films.

As in our own country, most Nepalis prefer big-budget films with lots of action and melodrama. Working on a shoestring with a less popular format among marginalized groups in one of the world’s poorest countries, Nabin and Sanjog say it’s a struggle to keep IFA going and still produce their own work. Yet they push forward, as with a new project that will show how indigenous groups suffered the most casualties in the recent earthquake yet received relatively little of the subsequent international aid.

They are eager to expand their ties with documentary filmmakers in the United States and other parts of the world. If Full Frame, the Center for Documentary Studies, or others with appropriate expertise could come to Nepal to provide free workshops, for instance, they’d welcome the assistance.

If anyone reading this is interested, please contact me offline (djarmul@gmail.com) or Nabin (nabinsubba@hotmail.com; he speaks excellent English) to follow up, or forward this story to someone you know. These folks are doing amazing work and they need some help.

2 thoughts on “Bringing Indigenous Voices to the Screen”