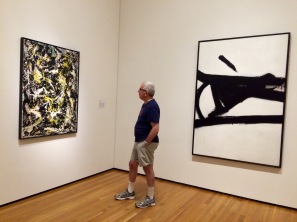 In my last two posts, I wrote about food and spirituality. But any great culture also needs, well, great culture.

That’s what we’ve enjoyed during two days in Cleveland, a city we had never visited before. We drove up yesterday from West Virginia, stopping en route to tour a candy-making factory in North Canton whose operation made Champa think of the famous Lucy episode where the assembly line runs wild.

After reaching Cleveland, we spent most of the afternoon at the Cleveland Museum of Art. The breath and quality of its collection was impressive, spanning a wide range of eras and styles. It was housed in a magnificent facility conceived by Rafael Viñoly, the same architect who designed the Nasher Museum of Art at Duke University.

Today we devoted the entire day to the Rock and Roll Hall of Fame, which exceeded my high expectations. I grew up with this music and was engrossed by the exhibits, videos and memorabilia, which ranged from Jerry Garcia’s guitars to Michael Jackson’s glove to gowns worn by Diana Ross and Beyonce. (Yes, that’s a custom motorcycle owned by Elvis.)

After leaving the museum, we drove to Edgewater Park to walk along Lake Erie. Then, we joined a large crowd of our new Cleveland friends at a free outdoor R&B concert at Wade Oval, a park in University Circle where Case Western Reserve University and other institutions are located. (That’s a video snippet below.) Finally, we ate a late dinner in Little Italy, eating pasta and listening to Dean Martin on an outdoor patio at a family-owned restaurant.

One thought on “Culture in Cleveland”