If you go to a restaurant in Moldova, don’t be surprised if the waiter doesn’t give you a big smile, offer menus to everyone at your table or serve all of the entrees together.

The waiter may also not be concerned about negative reviews on TripAdvisor or Yelp. Why? Because he may not know about these websites. Expedia? Lonely Planet? Maybe not those, either. Similarly, the woman working at a nearby hotel may not understand that you prefer to book a room online instead of calling her on the phone. 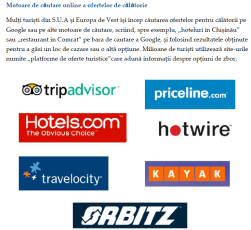 Moldova has so much to offer to foreign visitors: delicious food and wine, magnificent monasteries, beautiful countryside and travel options ranging from eco-tourism to adventure travel. Its hotels, restaurants and travel destinations are a bargain, and some offer warm and attentive service. Its people can be wonderfully gracious and generous, too. But it remains among the least-visited countries in Europe.

At a meeting several months ago, several of us serving as Peace Corps Volunteers here discussed whether we could do anything to help improve the situation. 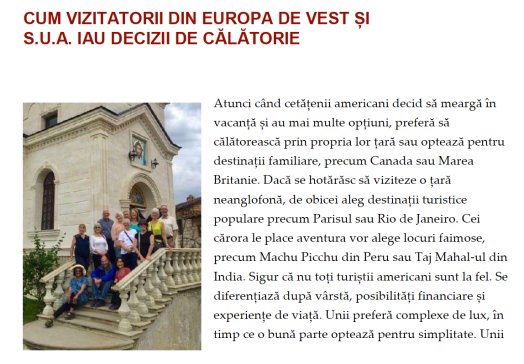 We knew we had no money to address big problems like Moldova’s poor roads. However, as Americans who have made lots of travel decisions ourselves and are familiar with Moldova’s charms and challenges, we decided we could contribute in another way: We could help the owners of hotels, restaurants and tourist destinations understand what we and others expect in terms of customer service and how we use the Internet when deciding where to spend our travel dollars, whether in Moldova or someplace else.

Since that meeting, our group has been working with the Moldova Competitiveness Project of USAID and the leadership of ANTRIM, Moldova’s national inbound tourism association. After months of work and numerous drafts in both English and Romanian, we recently completed our project: an illustrated Romanian-language brochure for Moldovan businesses seeking to attract tourists from abroad. ANTRIM has posted the brochure online and will be sharing it with its members. USAID said it looks forward to supporting the project, too.

If you don’t speak Romanian, here’s the brochure’s message in a nutshell: Customer service is critically important, so smile at your customers and take good care of them. Build a strong online presence and try to attract favorable reviews.

I recently put the final touches on the brochure with Natalia Țurcanu, the head of ANTRIM, who you see above with me in their lovely new tourism center in the heart of Chișinău. Located on the city’s main street, the center offers brochures, maps, advice and even virtual-reality tours, as you can see in the photo. USAID and others provided support for the center, which was launched with the big press conference where you see Natalia speaking in the photo below.

She hopes our brochure may lead to workshops or other training programs to help Moldova’s tourist operators get better at using the Internet and providing consistently great customer service.

Our group is ready to assist if she wants her people to hear this directly from American travelers.

If you know anyone in Moldova who might benefit from the brochure, I hope you will share it with them. Be sure to smile when you ask.

I’ve written previously about the Dreamups Innovation Campus and the Diamond Challenge competition for high school students, in which the team I mentored claimed one of the top prizes this year.

On Sunday, Champa and I visited Tekwill, a center that opened in March in northern Chișinău. It’s an educational and entrepreneurial hub with coworking spaces, a pre-acceleration program, startup competitions, events and resources ranging from 3D printers to international guest speakers. 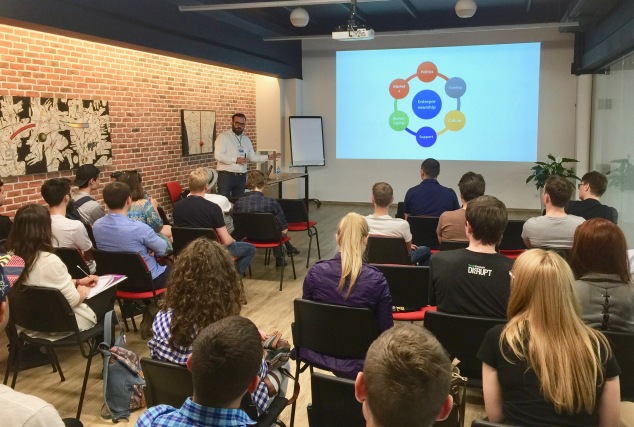 “Moldova’s capital, Chișinău, is among many cities around the world that aspire to develop a startup scene of their own,” Sergiu Matei, one of the founders of Dreamups, wrote recently on Startup Grind. “To be sure, no one will mistake it yet for Silicon Valley, much less Boston, Paris or Shanghai. Yet its entrepreneurial scene has quietly begun to emerge over the past couple of years, and it’s been exciting to watch.”

Sergiu concluded: “It’s not a fantasy to believe some of the world’s great new startups can and will emerge from Moldova, especially with such a strong entrepreneurial support system now starting up and growing every day.” 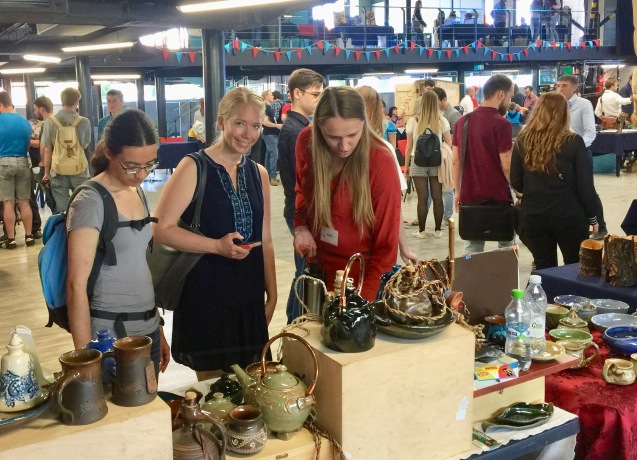 Sara Hoy, a fellow Peace Corps Volunteer, has been assisting Tekwill and other technology-based programs, with a special interest in attracting girls to the field. You can see Sara here, between two Moldovan friends, at Moldova’s first-ever Mini Maker Faire organized by Atelier 99 and held at Tekwill on Sunday.

Maker Faire organizes gatherings around the world, often in the Bay Area and other high-tech hot spots. It’s a modern mashup of science fairs, craft festivals and tech enthusiasts. The photos in this post are all from the fair, where Champa and I watched a virtual reality demonstration, listened to talks on starting a business, spoke with inventors and checked out gifts ranging from educational games to jewelry made from computer chips. 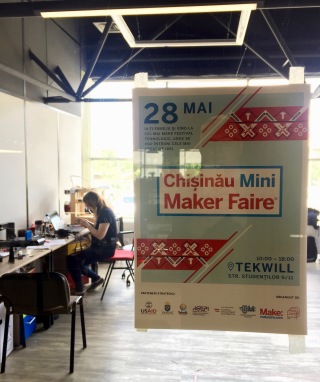 Tekwill focuses on information technology, working with students, professors and others who need help transforming a good idea into a successful business. With its educational programs, modern facilities, mentoring and international connections, it seeks to create high-quality jobs to deter so many Moldovans from leaving the country to pursue their dreams.

The entrepreneurs I met at Tekwill, like Moldova’s other entrepreneurs and innovators in civil society and diverse other sectors, represent the best in a country where one too often encounters despair about the economy, politics, corruption and other problems. For me, at least, their spirit is a booster shot of optimism, a reminder that change really is possible. As their entrepreneurial scene continues to grow, so does hope for Moldova’s future.