Staring at laptops adorned with stickers, sipping coffee, tapping their sneakers, the young people who gathered for a talk from a visiting technology journalist Thursday evening looked like they might be at Durham’s American Underground or some other entrepreneurial hub in the United States. They nodded when the host said “awesome” and “cool.” They laughed at a joke about Pokémon Go.

But they weren’t in Durham, much less Silicon Valley. They were in Chisinau, the capital of the Republic of Moldova, a country whose economy is struggling and whose people often voice skepticism about the possibility of making a change in the world. 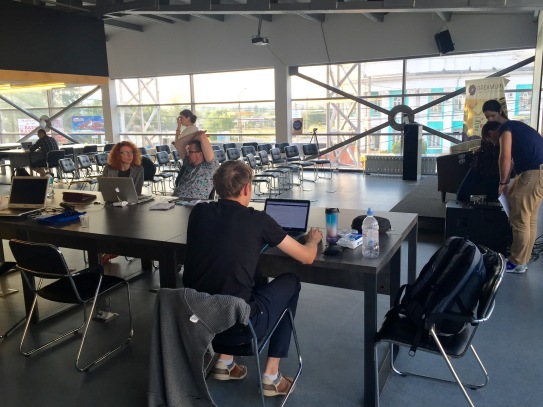 Almost all in their 20s and 30s, they gathered to hear Andrii Degeler offer advice on how to promote their startup businesses to reporters. Degeler, a Ukrainian native who now lives in Amsterdam, reports on the Central and East European tech scene for The Next Web and publishes a newsletter about the region.

“Salaries are much lower in Moldova,” he noted, saying this has the potential to provide “more freedom to experiment” to international companies that recruit Moldovan talent. The meeting’s host, Sergiu Matei, cautioned, however, that local entrepreneurs will succeed only if they are willing to fail, an idea familiar to U.S. startups  but challenging in a post-Soviet nation where many people are risk-averse.

Matei joined Degeler on the stage, both in armchairs, one wearing shorts, the other a black T shirt. A projected slide behind them showed the event’s sponsors — local companies, media partners, the U.S. government and others.

Chisinau’s Dreamups Innovation Campus organized the event. Founded only in March, the group calls itself “a community where young entrepreneurs learn, share ideas and launch global companies.” It hosts networking events, pitching sessions and discussions with mentors. It runs a startup accelerator program and helps sponsor local events such as Startup Grind Chisinau. Its website features quotes from Steve Jobs, Mark Zuckerberg and others.

Matei, 29, helped launch several companies when he lived in California’s Bay Area, returning to Chisinau to be with his family and work with the local office of a London-based language translation company. He also wanted to “give back to my community” by sharing his expertise with young Moldovans interested in starting their own companies. About 3,000 people have already participated in Dreamups activities, he says.

Back when I was in Durham, I interacted with the thriving local startup scene, which I helped publicize through articles such as these. Durham’s entrepreneurs face many challenges but these now seem small compared to the ones in Moldova, where venture capital is scarce, collaborators are few and the entire system can seem stacked against a bright young person with a great idea. Yet here was an entire room of them on Thursday evening, determined to make an impact. It was impressive.

I hope to write again about Dreamups and some other programs here that are promoting innovation and entrepreneurship, especially among girls and women. Peace Corps is working with two of these, Diamond Vision and Technovation. If you’re interested in this topic, I hope you’ll share a comment or words of encouragement here with Sergiu and the others. I’m sure they’d appreciate it. Perhaps someone might even want to send them some stickers for their laptops? That would be cool, possibly even awesome.

3 thoughts on “Startups Dreamup in Chisinau”

We returned this week from #Boston #Maine #NewHampshire and #Springfield. A new video on notexactlyretired.com has the highlights.
After last night’s game, there’s no doubt who’s standing taller.
Don’t miss the guest commentator for tonight’s NBA Finals game five! (Not exactly.)
Atop the White Mountains of New Hampshire.
In the White Mountains of New Hampshire
Your moment of bliss at Two Lights State Park.