As Peace Corps people who avoid shopping centers, buy things on sale and keep clothes for years, how did we accumulate so much stuff?

During the past several weeks, I’ve been hauling bags of clothes, kitchen goods, books, toys and other stuff to local charities. Here are just some of the receipts I’ve accumulated from Goodwill and others.

Champa and I have been cleaning out closets, cabinets, dressers and shelves. We’re getting rid of everything we can’t fit into a small storage room or bring with us to Moldova, where we’ll be serving as Peace Corps volunteers. Each of us is allowed to bring two bags weighing 50 pounds or less. The bags need to carry winter clothing, summer clothing, dress clothes, boots, shoes, electronics, photos, gifts and more, including school supplies for Champa.

We just met with a representative from Habitat for Humanity, to which we’re donating almost all of our furniture. We’re keeping only a couple of couches, two beds and not much more, depending on how much space remains in our upstairs storage room. Once everything is stored or removed, we’ll be living in a nearly empty house and sleeping on an air mattress until we depart on May 29.

It’s been humbling to confront how much stuff we’ve accumulated during 36 years of marriage. We don’t think of ourselves as materialistic, and we’re not hoarders. But all of those suits I needed for work, the books we bought for children and grandchildren, the sports equipment, kitchen gadgets, old sneakers, photo albums, CDs, LPs, DVDs and so much else — well, it added up more than we realized. 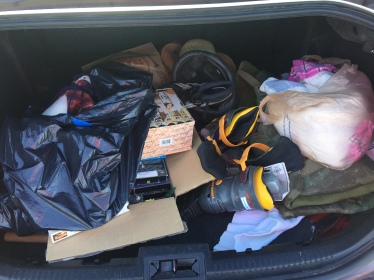 Getting rid of it has been liberating. We’ve already downsized so much that our house will be nearly empty when we return, which will probably motivate us to sell it. We’ll worry about that later. For now, we feel like we’re unloading the excess baggage of our old lives. Already we can sense how this lighter load will give us more flexibility to seek adventure and embrace what life has to offer.

Leaving my job and then joining the Peace Corps was the nudge we needed to undertake this process. Now that we’ve nearly completed it, I feel like someone who waited until a heart attack to get serious about losing weight. I wish I’d begun moving in this direction years ago. Stuff happens in life, for sure, but it doesn’t need to accumulate in such a large pile in my closet.