Admittedly, our interest is a little weird, but we’ve learned that capitol buildings often provide insight into how a state thinks about itself. They’re typically filled with exhibits, portraits and a sense of place that compensates for all of the self-important young legislative aides scurrying across the polished floors.

On Sunday, we visited two capitol buildings, both in Jackson, the capital of Mississippi. The one with the five columns in front is

the old capitol, which served as the statehouse from 1839 until 1905. It was restored after suffering damage from Hurricanes Katrina and Rita, and now serves as a museum.
You can see one of its exhibits, which depict Mississippi’s history and, yes, discuss slavery, the civil rights struggle and other difficult aspects of the state’s past.

(We were even more impressed by the extensive displays about these topics at Mobile’s history museum, which we visited a day earlier.)

The dome with the scaffolding is Mississippi’s current capitol, located a few blocks away. Nearby are Mississippi’s magnificent governor’s mansion, the Eudora Welty library and other landmarks.

Earlier in our trip, we visited the capitol buildings for Iowa, Washington and Texas, shown here. 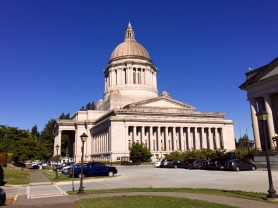 I especially enjoy listening to the tour guides describe complicated historical events or respond to sensitive questions. Our guide in Austin, for instance, kept saying “we” when referring to the Texans who fought the Mexican forces at the Alamo. In Madison, Wisconsin, which we visited a few years ago, our young guide did her best to avoid mentioning the battle then under way to recall Gov. Scott Walker, who is now running for president. In Augusta, Maine, one of the Democratic Party leaders saw us wandering in the hall. She showed us around personally while describing her battles with Paul LePage, the state’s colorful Tea Party governor. It was an insightful — and hilarious — experience we never anticipated.

So, the next time you’re visiting a state and are looking for a fun (and free!) way to learn about it, go visit its capitol building. You never know who you might run into.