Two of those of those three words apply to the cheese factories we visited Wednesday.

Located in Bakhor, a tiny village north of Ilam, they are part of a growing industry in Nepal. Western styles of cheese are still new here but they’ve begun catching on with restaurants and consumers in Kathmandu.

In Bakhor, which is 10 miles away from Ilam but more than an hour’s drive along a winding road, several businesses have responded by opening “cheese factories” — actually small facilities like the one you see here with the green sign.

The factories we saw were — how shall I phrase this? — less obsessed with cleanliness than in, say, Wisconsin or Switzerland. 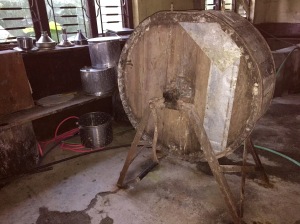 Each produces a single variety of cheese. There’s no Camembert, Fontina or mozzarella, just “cheese.” Artisans in other parts of Nepal do produce fine cheeses, some made from yak milk, but not here.

Still, we were impressed by what we saw: wheels of cheese and strings of churpi, a traditional local cheese so hard that two Nepali entrepreneurs in the United States now market it as dog treats, as featured on “Shark Tank.”

I bought a string of churpi from Kusum Rai, the girl you see here, and plan to bring it home for our dog, Bailey, and perhaps for some other lucky dogs.

You can see strings of churpi drying above Champa’s head.

Let me close with a personal message to my brother-in-law Joel, a cheese enthusiast who is joining us in Nepal along with several other members of our family later this month. Joel, we’re sorry you couldn’t join us today for the tour. On the other hand, since we know you love cheese so much, perhaps it’s just as well.

Finally, a travel note: We leave Ilam tomorrow for Samalbung, a much smaller town located on Nepal’s eastern border with India. I’m not sure about the wifi situation there. As with everything in Nepal, we’ll see what happens.

One thought on “Cheese ‘Factories’”